Florida politicians may be opening up some new channels when it comes to non-profit poker. If a bill produced on Monday in the state’s House of Representatives is passed, philanthropic groups will definitely benefit.

Republican Representative Elizabeth Porter wrote HB 799, that would allow certain charity organizations to host tournaments that raise funds for local causes, but would regulate who could utilize the fundraising technique. 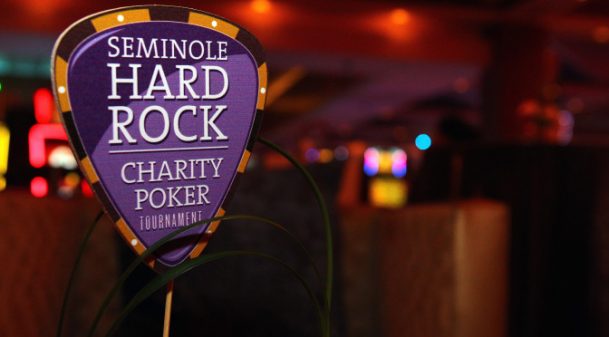 Currently charity poker events in Florida are legal only in tribal casinos and pari-mutuel facilities, but that will change if a newly introduced bill is passed by state legislators. (Image: Seminole Hard Rock Casino)

If approved, the new law would go into effect on July 1 and allow previously prohibited events under certain conditions, such as a maximum buy-in at $200 and 40 percent of the prize pool paid to players, not to exceed 80 percent.

The Sunshine State prohibits any type of charity poker event, unless it is held at a licensed card room or pari-mutuel facility.

The current statue states, “If poker is played at any other venue, caution should be exercised to ensure that it is not played in a gambling manner. A game that is operated for the purpose of some of the proceeds going to charity does not circumvent or negate the definition of gambling.”

But three elements must be present to qualify as gambling: An entry fee, a game of chance (which poker is classified as by the Attorney General’s office) and prizes awarded.

Several charity poker events had apparently skirted the law by not charging an actual “entry fee,” but instead incorporating the activity into a donation for a dinner. Police rarely enforced the law, concentrating more on illegal games  and those that were held at private homes or public establishments.

While online and charity poker are banned, live games at approved venues in Florida are legal and extremely prevalent. For example, while there are only 30 poker rooms spread across the Sunshine State, these encompass a total of more than 800 tables. In comparison, Nevada has 70 poker rooms, but only approximately 660 tables all told.

Even online poker was discussed at both the national level and in Florida’s Congress last year and while no action was taken, many believe it will be legalized within three years.