Phil Hellmuth is more than just one of the highest-profile poker players in the world. He’s a coach, philanthropist, Golden State Warriors fan, brand ambassador, and now, he has a new tag to add to that list: master debater. 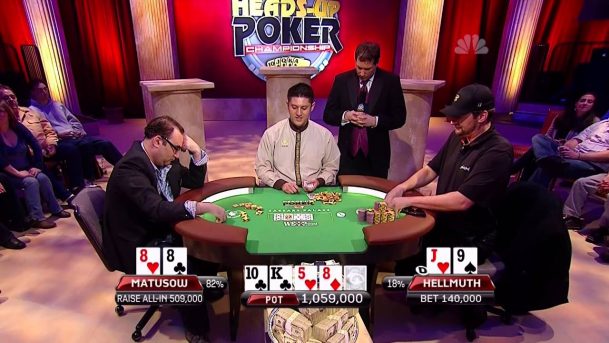 The Poker Brat, in an op-ed for  financial news site TheStreet.com, shared his advice for US presidential candidates Hillary Clinton and Donald Trump as they prepare for the first general election debate Monday evening.

Hellmuth referred to tonight’s debate as a “heads up” match and compared the debate to a game of poker. And after all, Phil is no stranger to heads-up battles. The all-time-most World Series of Poker bracelets winner has 14 heads up victories to his own credit. So how can his expertise benefit the two presidential candidates?

Assuming either would care to take the advice from a poker player, Hellmuth has a clear strategy for each candidate he believes would be successful in Monday night’s debate.

“The presidential election is like a big poker tournament,” the poker champ stated. “We started with nearly two-dozen hopefuls and now we’re down to two. In poker, we call this ‘heads-up’.”

No one technically “wins” a debate, of course, since winning is subjective in a format which doesn’t keep an actual score. But with the polls showing a close margin between the two candidates, how the public views the performances in these debates could decide the outcome of the election on November 8.

Clinton is experienced in one-on-one debates. She faced off with Barack Obama, the eventual winner, in 2008, and appeared in numerous one-on-one debates with her Democratic opponent Bernie Sanders this past year. But what strategy does the Poker Brat think she should take on Monday?

“If I were Clinton, I would focus as much as possible on the issues. But she needs more,” Hellmuth noted. “She needs to needs to find an active strategy to avoid getting called ‘crooked Hillary’ over-and-over throughout the debate [by opponent Donald Trump] and having that stick.”

Hellmuth expects Trump to attack Clinton for her alleged lies and corruption. But he doesn’t advise her to just ignore it. Instead, the poker pro suggests she call him out for his “playground tactics.”

Donald Trump will be walking into unchartered territory on Monday. He has never faced a debate opponent one-on-one. During the Republican primaries, the businessman went up against multiple opponents in each debate.

Hellmuth advises Trump to continue his “playground tactics” by insulting his opponent. Since it’s worked before, why change things up? is Phil’s view.

Hellmuth’s buddy and fellow poker icon Daniel Negreanu, in an interview with technology news site Wired.com, chimed in with his own debate strategies. His advice to his pledged candidate, Hillary Clinton, is to be aggressive. Against Bernie Sanders, as the poker pro suggests, she “took a conservative approach.” What is his advice for The Donald?

“It would be smart for his campaign to throw a curve ball to keep her off balance. If he shows up presidential and relaxed and she’s unable to shake him, he wins,” the Poker Kid advised.

The first of three presidential debates begins at 9:00 pm EST at Hofstra University in Hempstead, New York. It will be televised live on all major news outlets in the United States. Lester Holt of NBC will be the moderator.