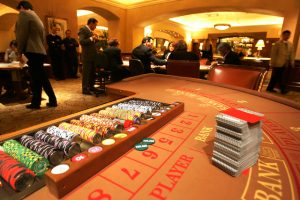 There’s a certain privilege that comes with being a high roller. You’re stuffed to the gills with enough cash that putting large chunks of it on the line doesn’t trigger the batting of an eyelash. And let’s not forget the VIP treatment given out by casinos. Still, where does all that money come from? That’s information casinos and their high rollers have never really needed to divulge – until now. But the United States Treasury Department may be changing things very soon.

Cracking Down on Laundering

The Treasury Department could soon require casinos to report the sources behind their high rollers’ gambling funds. The effort is spearheaded by the department’s Financial Crimes Enforcement Network (FinCEN) as a method to keep potential money laundering in check.

FinCEN’s Director Jennifer Shasky Calvery spoke with an audience at the Global Gaming Expo in Las Vegas last year, where she said casinos might be held to the same scrutinized standards as banks. Calvery noted that casinos – along with any other financial institution – should be concerned about their reputation. She emphasized that integrity was key.

Murmurs of having casinos comply with Title 31 of the Bank Secrecy Act have come from FinCen in the past. While the Bank Secrecy Act originally applied to financial institutions like banks, criminal use of banking services in casinos meant the Act needed to be applied at them as well.

Though casinos are required to report suspicious activity by law, they are not required to probe into the source of a gambler’s bankroll. According to a recent report in Reuters, FinCEN will announce a requirement that casinos must investigate those sources under Title 31.

Where FinCEN’s goal of preventing illegal activity is justifiable, casino operators are still shocked at what the implications of this requirement could mean. Many feel that gamblers would rather opt out of gambling at the tables altogether than have their privacy invaded. Operators fear the being abandoned by some of the high rollers who helped keep the Las Vegas Strip afloat during the recession.

Because restrictions are more lax in gambling markets such as Asia, the fear of losing business is justifiable. After Reuters’ report was released, the American Gaming Association (AGA) made a statement saying they were working with federal agencies to find common ground on the issue.

Even if this new requirement is an invasive one, it isn’t the first time casinos have used systems to combat laundering and illegal activity. Nevada’s Regulation 6A kept track of gambling transactions, but was set aside in 2006. As the federal government began tracking large cash transactions, the regulation became obsolete.

Some feel that when it comes to Title 31 compliance, the casino industry is merely behind the times. The banking industry went through similar motions and still survived. It’s now just a matter of time before casinos have to follow suit.

Big name casinos have not been immune from the types of activities FinCEN is trying to eliminate. Last August, Las Vegas Sands paid $47.4 million in a deal made with federal prosecutors. The settlement helped the Sands avoid criminal charges in a money laundering investigation at The Venetian. Caesars Entertainment was also under investigation for possible laundering, and admitted to having FinCEN involved.

A recent statement by the FBI and a group of experts expressed concern that online gambling has the same potential for illegal activity as land-based casinos.

“The FBI’s correspondence confirms what we have known for several years–that, despite the gambling industry’s claim to the contrary, there exists effective and non-detectable methods which can be used to anonymize a player’s identity and geolocation in order to corrupt a game and these threats will become more prevalent as more states race to embrace online gambling,” said the statement.

With casinos currently in the crosshairs of FinCEN, could the next target become the volatile United States online gambling market?