Out on Parole, OJ Simpson Heads to Las Vegas, as Florida Says ‘Stay Away’

Former football star O.J. Simpson walked out of a Nevada prison early Sunday morning and headed to Las Vegas, while his ultimate choice of residency in Florida remains uncertain. The 70-year-old had noted a desire to move to the Sunshine State, but at least one state official has expressed her displeasure over the potential relocation. 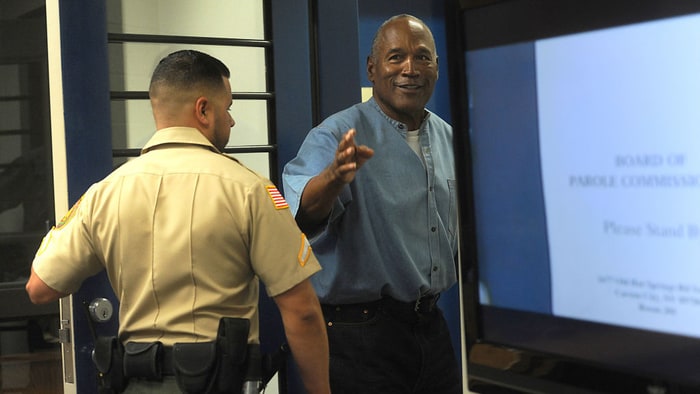 He’s out: After nine years in the joint, OJ Simpson is in Las Vegas,
but not exactly living the dream while serving parole. (Image: Getty)

The one-time actor and pitchman was released from Lovelock Correctional Center just after midnight on October 1, the first possible day he was eligible to be set free on parole. He served nine years for robbery and kidnapping charges stemming from an altercation at the Palace Station in Las Vegas when he attempted to retrieve memorabilia he said later that he believed had been stolen.

A video posted on social media by the Nevada Department of Corrections showed a worker telling him to “come on out.” Brooke Keast, a spokeswoman for the organization, told the media that she talked to their most famous criminal just before his release.

“I told him, ‘Don’t come back,’ and he responded, ‘I don’t intend to,’ ” Keast added that Simpson was

” … upbeat, personable and seemed happy to get on with his life.”

Keast told reporters that Simpson’s departure went smoothly. Though cameras were outside the facility, he had no comment as he got into a car with an unidentified driver and left.

“It was incident free, nobody followed … It was a public safety concern. To make it quiet, under the radar and incident-free,” Keast said.

Simpson didn’t remain incognito for long, however. He was discovered at a gas station about five hours later and groused at reporters who asked him questions.

“None of your business,” he said when asked about where he was going. “I’ve been in Nowhere, USA, for the last nine years, doing nothing. Nothing has changed in my life. What are you guys — what do you expect? Please? Can I have a break here?”

He then inquired if the person was stalking him before he got up and left the location.

Simpson had expressed a desire to move to Florida to be with two of his grown adult children, but will remain in Las Vegas for the foreseeable future. He is apparently living in a house in a gated community and will be there for an undetermined amount of time.

Florida’s Attorney General Pamela Bondi has not been shy about her opposition to the possible new neighbor coming to her area. On Friday, she sent a three-page letter to the state’s Department of Corrections imploring them not to approve his move.

“Floridians are well aware of Mr. Simpson’s background, his wanton disregard for the lives of others, and of his scofflaw attitude with respect to the heinous acts for which he has been found civilly liable,” she said in a statement.

“The specter of his residing in Florida should not be an option. Numerous law enforcement officials in Florida agree with this position. Our state should not become a country club for this convicted criminal.”