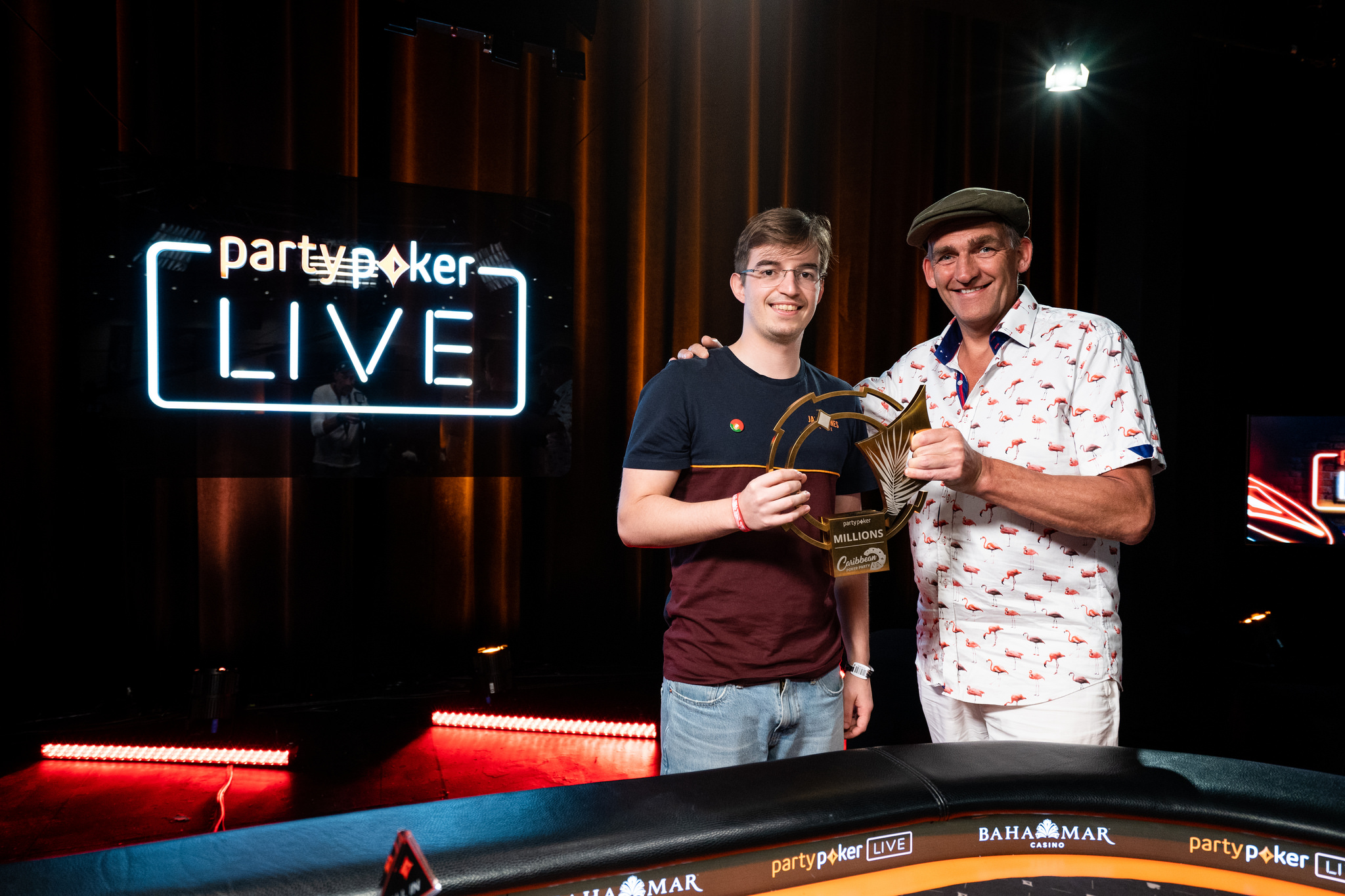 Filipe Oliveira (left) survived being the short stack at the final table to come back and win the Caribbean Poker Party Main Event and a $1.5 million prize. (Image: Partypoker/Flickr)

It was by far the largest win of Oliveira’s career, as the Portuguese poker player had only about $138,000 in total tournament earnings heading into the Nassau event.

Oliveira Battles Back from Short Stack

For much of the final day of play, however, it didn’t look like Oliveira was going to snag his first major title. After a great run that left him among the final six from the field of 1,815, Oliveira was on the verge of elimination, having just 3.5 big blinds left in his stack.

But as every tournament player knows, things can change at the final table in a heartbeat. A couple of fortunate all-in wins later, Oliveira found himself back in contention as his competitors started to fall by the wayside.

When the field had dwindled to just three players, Oliveira discussed a potential chop with Ireland’s Marc MacDonnell and American Craig Mason. But with even the third-place finisher set to earn $1 million, the players couldn’t see any reason not to play it out without making a deal, and the action continued.

MacDonnell was eliminated next, losing most of his stack to Mason when he attempted to catch the American in a bluff with jack-high – only to see Mason show up with a flush. That gave Mason enough chips to contend with his Portuguese opponent, as Oliveira went into heads up play with 906 million chips to Mason’s 879 million.

Oliveira opened up a slight chip lead with an ambitious bluff, showing Mason a four after pushing his opponent off a pair of kings. The Portuguese player then quickly pounced on that advantage. On the final hand, Mason opened with K♥9♠, which led to a pre-flop three-bet from Oliveira, who held A♥9♥. Mason called, and the dealer revealed a 9♣Q♦2♠ flop.

With both players holding top pair, Oliveira opened the action, eliciting a shove from Mason. Oliveira quickly called, showing Mason that he was dominated. A J♦ on the turn gave Mason some straight outs to improve his chances somewhat, but a 4♥ on the river shut the door, giving Oliveira his first major poker title.

Mason took $1.2 million for his runner-up finish, bringing his lifetime tournament earnings up to $1.47 million.

After his win, Oliveira acknowledged that he was fortunate to survive when he was short-stacked. However, he felt that the most important moment of the final table may have come when his countryman Diogo Veiga was eliminated in sixth place, earning $400,000.

“It was really hard playing with him,” Oliveira told PokerNews. “It was pretty tough for me to have him on my left. I was happy when he busted because it was more chances for me to win.”

Congratulations to Felipe Olivera for this Title Obtained in the Caribbean Party poker, but to achieve it having at one moment a short stack, what it costs to overcome a tournament on the verge of elimination and of course more joy to know that one comes back with few chips and winning the tournament is wonderful, the last hand to win by the kicker greater satisfaction and more in the heads up. Congratulations Felipe and enjoy this title.

what a good prize, and earning almost 1.5M dollars is not easy, and more in these final months of the year when that money does not go wrong. jejeje to enjoy those Christmas my friends olivera, sincerely congratulations great achievement in an event as important as this and return from below is not easy