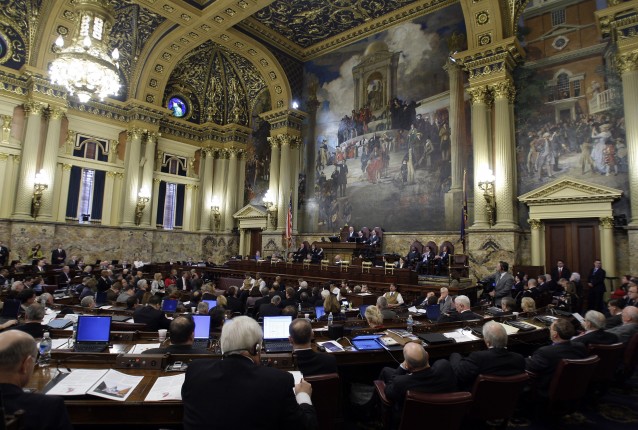 SB 900 is the first Pennsylvania online poker bill to be introduced to the State Senate this year (and fifth overall for the Keystone State), but its proposed taxation rate is prohibitively high. (Image: thinkprogress.org)

The Pennsylvania online poker bill wars continue, with bill #5 now being brought into the fray.

The latest version, SB 900, has been formally introduced to the State Senate, and while this may be the fifth such bill proposed this year, it could also be the one with the best chance of legalizing online poker in 2015.

Not only is SB 900 the first piece of legislation introduced to the Senate as opposed to the House, it’s also backed by the right people, including a group of influential senators that comprises Kim Ward, Robert Tomlinson, Elder Vogel, and Joseph Scarnati.

The bill would legalize and regulate online poker and casino gambling, as well as introducing reforms to Pennsylvania’s land-based gambling industries, such as allowing casinos to serve alcohol 24/7.

As in neighboring New Jersey, the state’s existing land-based casinos would be permitted to partner with online operators in order to offer online poker and casino gaming to customers within the state.

An effective online gaming statute would seek to “provide public trust in Internet gaming; ensure that Internet games are fair and safe; strictly regulate the conduct of Internet gaming in this Commonwealth [… and] maintain the success of slot machine and table games gaming at its existing licensed facilities and sustain the taxes, jobs, investment and economic development produced by those licensed facilities,” according to the newest bill’s wording.

Regulation under terms of the bill, however, would differ from New Jersey in a number of ways. First, individuals seeking to sign up for an online account would have to do so in person at the licensed land-based casino and would have to hold an active membership card. An exception would be made for players who live a distance of 20 miles or more from a land-based casino that has an online gaming license.

This is an idea that was mooted in draft legislation in California earlier this year, and is obviously designed to maintain footfall within the brick-and-mortar properties. However, John Pappas of the Poker Players Alliance was highly critical of this idea when it was attached to California Assemblyman Mike Gatto’s bill.

“It defeats the purpose of online poker, to be able to deposit from your computer,” Pappas said. “I think it’s someone’s misguided understanding on how to establish synergies between brick-and-mortar casinos and online players. There are other ways to bring people to your properties.”

Another potential issue with SB 900 is that it will make the cost of doing business very expensive for operators. The bill proposes an astronomically high 54 percent tax on gross gaming revenue. New Jersey, meanwhile, where online poker is yet struggling to flourish, pays just 15 percent.

We’ve seen elsewhere that in highly taxed jurisdictions, online poker becomes stifled, as operators are unable to devote their resources to marketing, and can’t compete with unlicensed sites when it comes to bonuses and promotions. Licenses, meanwhile, will cost $10 million, plus an extra $1 million renewal fee due every five years.

A hearing for SB 900 is scheduled for the Senate Community, Economic and Recreational Development Committee today (June 10).