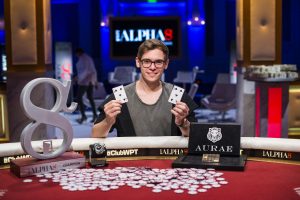 As the dust settled on the WPT Five Diamond Classic at the Bellagio, with Kevin Eyster taking the top prize there, the small matter of the Alpha 8 was only just kicking into gear.

As Eyster collected his prize, across the room Fedor Holz was busy amassing a sizeable chip-lead in the Alpha8; one that, as the final table approached would increase to 40 percent of the chips in play.

That lead proved to be unassailable, despite a late charge from Daniel Negreanu, who finished third in the event for $640,103.

Petrangelo has had an outstanding year on the tournament scene, a year that began with a first-place finish at The Turbo 8-handed event at the PCA and ultimately wound up here, via bracelet glory over the summer.

All in all, the Massachusettan cashed in 17 events over the course of the year, making an extraordinary 11 final tables.

But heads-up play was over in just 23 hands when Petrangelo shoved with A-Q over Holz’s button limp. Holz called with 5-5, the pair standing up to win the race and the title. Holtz takes home $1,589,219, a Hublot watch, and an Aurae solid gold Mastercard, preloaded with $10,000.

Prior to this win Holz had live cashes totaling more than $2.2 million, according to thehendonmob.com, but he also won the 2014 World championship of Online Poker Main Event for $1.3 million, under his online moniker “CrownUpGuy.”

Meanwhile, the WPT has announced the most expensive tournament in history will take place at the WPT National Philippines in January 2016, boasting a $200,000 buy-in. According to the organizers, some of the biggest names in poker have committed to taking part.

The WPT will return again on January 31 with the Borgata Winter Poker Open in Atlantic City, although there are currently no Alpha8 events scheduled.

Did I just read Tom Dwan is entering a $200,000 buyin tournament? Who the hell is staking that guy haha