The PokerStars WCOOP $102,000 buy-in Super High Roller began Sunday online with just a handful of players. By the end of the registration period, there were a total of 28 entries in this historic rebuy tournament. 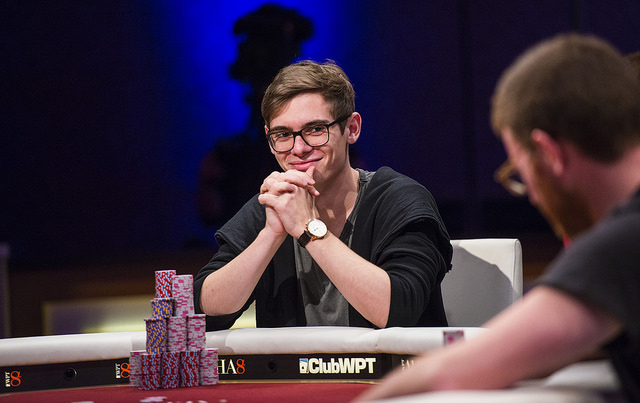 Fedor Holz, who’s been killing it this year in a variety of events, is at the final table of the $102,000 buy-in PokerStars WCOOP Super High Roller.  (Image:  en.clubpoker.net)

Jason Mercier, the 2016 World Series of Poker Player of the Year, was two of those entries. He bought in early and busted quickly, while streaming his play live in front of Jason Somerville and his Twitch followers. Not wanting to let the audience down, he rebought. But, again, he had some bad luck, and was unable to make a deep run.

Fedor “CrownUpGuy” Holz, on the other hand, did what he always seems to do:  build a big stack. The recent WSOP One Drop High Roller winner is one of six remaining players heading into the second and final day on Monday. The German poker pro has 163,382 chips, good for third best at the final table.

The chip leader at start of day Monday, Salman “salfshb” Behbehani, is in the lead with 175,359. First place will pay $1,400,00. The runner-up gets $840,000. Third place earns $560,000. Fourth place gets nothing more than the honor of saying they finished fourth in the biggest buy-in online poker tournament ever.

Super high roller tournaments always bring out the top players in the world, especially one with the largest buy-in in online poker history. But ten-time WSOP bracelet winner Phil Ivey wasn’t among those in the field, even though he was, along with Mercier, the odds-on favorite to win.

Under his online handle, “philivey2694” entered the tournament, however, and made the final table with the second largest chip stack (168,345). You may know him better as Isaac “Hollywood” Haxton.

Doug Polk, like Mercier, streamed his play live on Twitch. Also like Mercier, Doug won’t be coming back for Day Two. But at least he didn’t fire two bullets. Polk and Mercier feuded this past spring over Jason’s poker skills, before Mercier showed him up big time at the World Series of Poker. Ben Tollerene, Polk’s new rival, joined the field, and also went home empty-handed.

The rest of the players included some bracelet winners, poker legends, and Global Poker League competitors, including Justin Bonomo, Brian Rast, Bryn Kenney, Jason Koon, Mustapha Kanit, Igor Kurganov, and Nick Petrangelo. Of those players, only Kurganov remains, but he’ll be the short stack (85,058). One double-up and he could be the chip leader, however.

This tournament was one of the most anticipated online poker events in a long time. That, mixed with a $102,000 buy-in, makes for a pressure-packed tournament. The final six players, all established online pros, will have to grind to win this title.