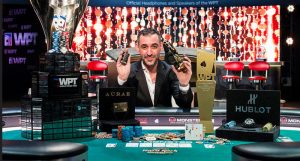 Farid Yachou has won every tournament he has played on American soil. Granted, that’s only one event but it’s a huge victory for a man with very little live tournament experience.

Yachou outlasted 63 other players in the World Poker Tour Tournament of Champions at Seminole Hard Rock Hotel and Casino in Hollywood, Florida. The $15,400 buy-in event lasted three days and featured some of the most successful WPT players of all-time.

The Moroccan had never been to the United States prior to flying out to South Florida for this event. He was only one of two non-Americans at the final table and became the last man standing. As a reward for his impressive performance, he will be going back to Morocco with $381,600.

For Yachou, this was only his second career cash in a live poker tournament. His last one came at the beginning of WPT Season XIV in Amsterdam. He won that event as well.

He had to earn his Tournament of Champions victory. The final table was stacked with superstars such as Michael Mizrachi, Jonathan Jaffe, Noah Schwartz, and Darren Elias. Eight players cashed.

But funny things happen in poker. Sometimes it takes just one or two lucky cards to change the complexity of any tournament. This was no different.

Heads-up play lasted just 12 hands. On the final hand with a double-paired board, Yachou shoved all-in with a full house and was called by Darie’s King-high.

On top of the nice payday, the champion also received a 2016 Corvette, a Hublot King Power Titanium watch, an Aurae Solid Gold MasterCard, a custom premium poker table, a spot in Tiger’s Poker Night charity event at MGM Grand in Las Vegas, and a round of golf in Sin City with WPT Tournament Director Matt Savage.

Chino Rheem, Dietrich Fast, and Aaron Mermelstein all won Main Events. But it was Mike Shariati who scored the most season points and won Player of the Year. Not only did he win the WPT Legends of Poker at legendary Commerce Casino in Los Angeles. Shariati also finished second in the WPT L.A. Poker Classic at the Bicycle Club.

He won more than $1.3 million this past season but did not cash in the Tournament of Champions.