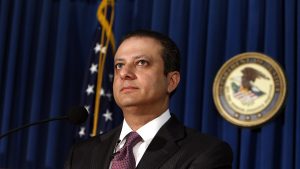 Preet Bharara, US Attorney for the Southern District of New York, who built the case against PokerStars, Full Tilt and Cereus that lead to the Black Friday indictments. (Image: forbes.com)

Paul Tate, the former payments director at pre-Amaya PokerStars, pleaded guilty in the Southern District Court of New York on Thursday to one charge of operating an illegal gambling business.

Tate was one of 11 people indicted in April 2011 on charges of violating the Unlawful Gambling Enforcement Act, bank fraud and money laundering, after the US Department of Justice seized the domains of PokerStars, Full Tilt, and Cereus on the day now referred to as Black Friday.

According to Fortune, the 42-year-old British citizen told the court he began working for PokerStars in 2006, doing technical work and engaging with payment processors.

“My family and I have paid a heavy price for this conduct,” he said.

Tate had been described as “at large,” by the US authorities, although he continued to work for PokerStars in the Isle of Man long after Black Friday, presumably departing the company when it was purchased by Amaya in 2014.

Last year he was named by the New Jersey Division of Gaming Enforcement as one of the individuals that must never again have anything to do with the running of the company as a condition of its New Jersey licensing.

The original charges against Tate included money laundering, and conspiracy to commit bank fraud and wire fraud, but these may have been removed as part of a plea bargain. PokerStars, Full Tilt and Cereus were accused of using “fraudulent methods to circumvent federal law” to “trick financial institutions into processing payments on their behalf,” in the indictment.

“[They] arranged for the money received from U.S. gamblers to be disguised as payments to hundreds of non-existent online merchants purporting to sell merchandise such as jewelry and golf balls,” it reads.

“Of the billions of dollars in payment transactions that the Poker Companies tricked U.S. banks into processing, approximately one-third or more of the funds went directly to the Poker Companies as revenue through the “rake” charged to players on almost every poker hand played online.”

The sites were also accused of making large investments in financial institutions, such as Sun First Bank, so that they could get them to pay out player funds by mis-coding transactions.

Of the original 11 indicted, only Scott Tom of Absolute Poker and Tate’s former boss, PokerStars founder Isai Scheinberg, have failed to appear before the courts. While PokerStars’ $731 million payment to US authorities in 2012 settled the civil case against PokerStars, the criminal charges against Scheinberg remain.

Tate faces a maximum sentence of five years in prison. A sentencing hearing will be held on November 21. 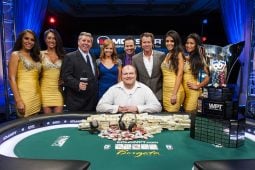