Ex GF of Jonathan Duhamel Gets Out of Jail Free
July 1, 2014 Scandals & Crime

Ex GF of Jonathan Duhamel Gets Out of Jail Free 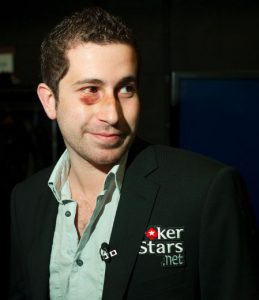 Jonathan Duhamel, showing bruising from the beating he received from the accomplices of his former girlfriend Bianca Rojas-Latraverse back in 2011. She was released from prison this week. (Image: blogs.theprovince.com)

An apparently remorseful Bianca Rojas-Latraverse, the ex-girlfriend of former World Champion Jonathan Duhamel, was released from prison this week having served two-thirds her sentence for orchestrating the brutal home invasion robbery of her former boyfriend.

Duhamel, who won $8.9 million with his first-place finish at the WSOP, was bound and beaten by two masked men when he answered the door at his home in the suburbs of Montreal in December 2011. The assailants made off with about $150,000 in cash, a Rolex watch, and Duhamel’s 2010 WSOP Main Event bracelet.

Wanted to Stay in Prison

Rojas-Latraverse persistently denied her involvement in the robbery, but the judge disagreed and found her guilty of being the “brains” behind the operation, sentencing her to three-and-a-half years. Crucial to her conviction was the fact that she had sent text messages to a girlfriend outlining her plans for the attack several months earlier.

Rojas-Latraverse told the parole board this month that she wished to remain in prison to serve her full sentence, because she hoped it would “reduce the pain” of her victim. However, the board ruled that she should be released, citing a difficult childhood filled with parental rejection, sexual abuse and bullying as mitigating factors.

“The Corrections and Conditional Release Act stipulates that you will be released under supervision on the prescribed date and remain (free) until your sentence expires,” the board ruled. “The main factors that contributed to your criminal behavior are poor management of your emotions, and lax and criminal values idleness, significant emotional immaturity and the lure of easy money,” it added.

From Strength to Strength

Her “victim,” meanwhile, has gone from strength to strength. In the months following the assault, Duhamel wrote in his blog: “My desire to compete, to surpass myself, to win, had disappeared. I had to draw deeply into my soul to find the energy and motivation to keep going.”

Duhamel drew deeply, and within a month he was at the PokerStars Caribbean Adventure where he went on a tear. First, he finished fourth in the Super High Roller event for $313,600, then fifth in the 8-max Turbo tournament ($7,990), before winning the 8-max ($239,830) and placing second in the 8-Max High-Roller ($634,550). Since the robbery, Duhamel has amassed over $2 million in tournament earnings, making him the most successful WSOP Champion, post-win, since Joe Hachem.

The missing WSOP bracelet was found, bent and broken, in a trash can by a road sweeper several months later, with the engraved winner’s name partially scratched off. Duhamel was awarded a replacement at the following year’s WSOP.