Comedian Brad Garrett made enough bankroll to take him through several lifetimes in the long-syndicated popular TV series Everybody Loves Raymond. Playing the somewhat hapless cop and brother of Ray Romano, Garrett became an iconic and beloved American character. He now performs when in town at his eponymous comedy club at the MGM Grand.

Oh, and he happens to love poker, too, hosting home cash games in Hollywood that most likely have buyins and pots that could pay down at least half of the national debt. 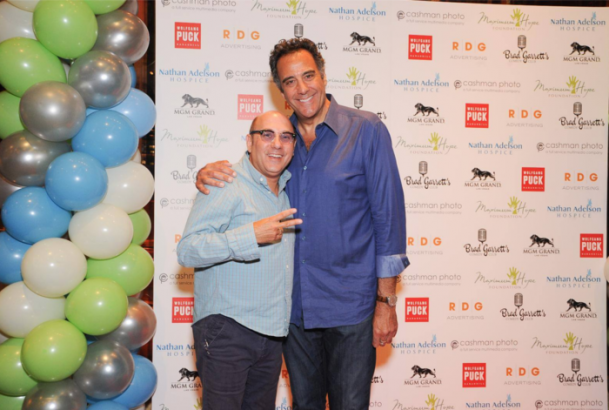 Seen here at last year’s event, Willie Garson and Brad Garrett are ready to do it again on July 2 at the MGM in Las Vegas. (Image: Maximum Hope)

So when it came time to create a charity poker event, Garrett naturally decided to host it at the MGM Grand on the Las Vegas Strip. The Emmy Award-winning actor will sponsor the 7th annual Maximum Hope Foundation Charity Poker Tournament on Saturday, with the event kicking off at noon.

The tournament tables will be set up on the main casino floor, between Wolfgang Puck Bar & Grill and the Cirque du Soleil KÀ Theatre. The buy-in is $250, with $100 rebuys during the first two hours of play.

“I am thrilled and humbled once again to host this amazing event with MGM Grand,” said Garrett of the tournament. “Maximum Hope helps hundreds of families and kids each year as a direct result of this . . . No parent should have to worry about losing their home or having their electricity turned off while also caring for a child who is battling to survive.

“I am touched by the story of every family we help, and grateful for every person who attends our event. They literally make it possible for us to continue the incredible work we do.”

Play Against Celebrities and Poker Pros

Among the celebrities confirmed to make an appearance is Willie Garson, star of the television shows White Collar and Sex and the City, and reality star Jackie Ibarra, who has appeared on both Big Brother and The Amazing Race. The event is also expected to draw heavily from the poker world, with participation from many who are in town for the World Series of Poker, including married pros Chip and Karina Jett.

“The Brad Garret charity tournament is always a first-class event,” said Chip. “It is a great opportunity to rub shoulders with some A-list celebrities.”

Karina Jett echoed those sentiments. “The Maximum Hope Foundation . . . offers urgent financial relief to families caring for a child with a life-limiting illness, so it’s a great cause I’m happy to get behind. I hope the rest of the poker world will do the same.”

All proceeds from the event will benefit Maximum Hope Foundation, which works with hospital and hospice social workers to provide families financial help for necessities like rent, utilities, groceries, or gas.

Registration for the charity event will begin at 9 am on Saturday, July 2. Participants will have the opportunity to purchase three rebuys in advance for the price of two ($200). There also will be a final $100 add-on available at the conclusion of the two-hour rebuy time period. As an extra fun incentive, celebrity chef Wolfgang Puck will donate a buffet brunch to run from 11 am to 2 pm for all tournament players.

The winner of the charity tournament will take home a guaranteed $10,000 first-place prize, with other prizes being awarded to the final five survivors. Garrett will also auction off two seats to his private home poker game with Ray Romano, with 100 percent of the selling price going directly to families in need.

Life on the A-List

While Garrett himself has only $787 in career tournament earnings, he is no stranger to poker.

Back in 2005, the comedian defeated the likes of Jason Alexander, Bonnie Hunt, Colin Quinn, and Malcolm-Jamal Warner to win the fifth edition of Celebrity Poker Showdown on Bravo. Then in June of last year, he appeared alongside actors Hank Azaria, Don Cheadle, Norm Macdonald, and Kevin Pollak in the televised Super High Roller Celebrity Shootout.

As if playing with Hollywood stars weren’t enough incentive, imagine your excitement if you find yourself sitting next to CardsChat reporter Jon Sofen or yours truly: moi. Hope to see you there.