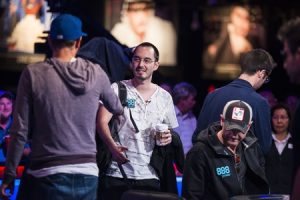 Will Kassouf (center) shakes Griffin Benger’s hand after busting out of the Main Event as Fernando Pons (right) looks on during the ESPN WSOP Main Event coverage. (Image: ESPN)

Sunday night marked the final ESPN WSOP Main Event coverage prior to the start of the final table on October 30th. And, as you would have expected, the controversial Will Kassouf was at the center of attention.

The coverage began with 21 players and played down to the November Nine. Michael Ruane was the chip leader through much of Day Seven, but all eyes were on the Brit Kassouf.

He’s been a topic of discussion among poker players for his “speech play” during ESPN’s Main Event coverage. Some pros, including Daniel Negreanu, have defended Kassouf’s behavior. But others despise him.

Those annoyed of his style of play probably didn’t change their minds after Sunday night. Before play began, WSOP Tournament Director Jack Effel, for the second time during the tournament, had a discussion with Kassouf to let him know his constant talking at the table is tiptoeing the line of decency.

His table mates weren’t impressed either. Cliff Josephy and Gordon Vayo, both eventual November Niners, called him out on multiple occasions for taking too long to act far too often.

“This table is all about you, Will. Remember that,” Josephy sarcastically stated.

“Here’s example ‘A’,” ESPN commentator Norman Chad said during a hand early on in the coverage. “Will is sitting here with nine-deuce and he treats it like it’s quantum physics. Raise or fold. From Jack Effel’s perspective, if everyone did what Will does, he couldn’t run a poker tournament.”

The final hand of episode 13, with 17 players remaining, Kassouf picked up pocket kings and attempted to use his speech play to get Griffin Benger to shove all-in, Kassouf then bumped his wager up to 2.3 million.

“I have to find out where I am. I think I’m ahead at the moment. I think you need to get lucky. No shame in passing. I have the best hand at the moment otherwise you would have called by now. So I must have you beat,” Kassouf said as Benger contemplated his decision.

Kassouf continued to speak as Benger stared into his eyes, giving off no emotion. He then four-bet it to 5.6 million. Mr. Speech Play continued talking and, instead of quickly putting his remaining chips in the pot like most would have done with pocket kings, he tanked and asked Benger how many chips he has.

His opponent refused to speak or even move. Benger held still for quite some time before he had enough.

“You wanna gamble? I’m not into that. I’m here to win it. Play for the win, right? Are you doing the same? Or are you going to wait for the next pay jump at 15? 90k is 90k, right? That’s the Main Event for the next nine years,” Kassouf said.

Jerry Wong, another eventual November Niner, called for the clock. And then Benger finally snapped on Kassouf.

“You’re just an abusive person. It’s not funny,” he said to Kassouf. “You’re bein abusive to me. You’re being abusive. It’s called verbal abuse. What you’re doing to me is verbal abuse. You’re a bully. It’s rude, it’s mean.”

“No, it’s not called ‘speech play’, it’s called being a bad person. You should really check yourself,” Benger responsed while pointing his finger at his opponent.

The two continued yelling at each other before Kassouf finally shoved all his chips in the pot and was quickly called by Benger’s pocket aces.

Kassouf’s hand didn’t improve, sending him to the exits in 18th place. Many might see his bust out hand as justice.

Kassouf’s run ended on Day Seven in July, but Benger will be back on October 30th as a member of the Main Event final table. ESPN will cover the November Nine in its entirety on a 30-minute delay.

There will be three days of play before a champion is crowned on November 1.

I actually think Benger played Kassouf. Benger probably had been waiting for that exact moment to call Kassouf out and use his prior actions/speech against him and make Kassouf make the call, which he Kassouf may have done with something other than Kings.

….You believe a SJW ‘played’ someone? What part of EMOTIONAL OUTBURST do you not understand? Imbecile.

A person has a right to free speech, a player paid his money, Will was refreshing to the game, his tilting speech is his right and he owned it. His persona at the table was to further his small edge against a diverse field of ego’s. Psychology is a beautiful weapon, one that my game is also working on as well in my own way. His slow time to act was tilting the table, and then speaking for an extended period of time was done consistently that goes beyond the cards. However, the speech that was used was nothing personal, and the words had no malice behind them rather Will was just extremely obnoxious.

Online, I have witnessed way worse statements made in hate towards other players. However, he should have laid those Kings down pre because with that line of play this player was recognizing they were going to trap him because of his image and my game knows this from experience. My approach would have been to engage him consistently with the same tactics to find out how much he could take because Will is used to being called a clown and those statements allows for Will to know his speech is working because he is used to ego’s reacting that way.

It would have been more refreshing if any of those players would have attempted to use the same tactics back at him with no emotion, just a better brand of psychology that might have slowed that speech down. Anytime the referees get involved to talk to Will, Will is winning and the WSOP is losing. Congrats Will.