2022 WSOP World Champion Espen Jorstad is at the center of a swapping scandal following accusations of non-payment by Alex Theologis. 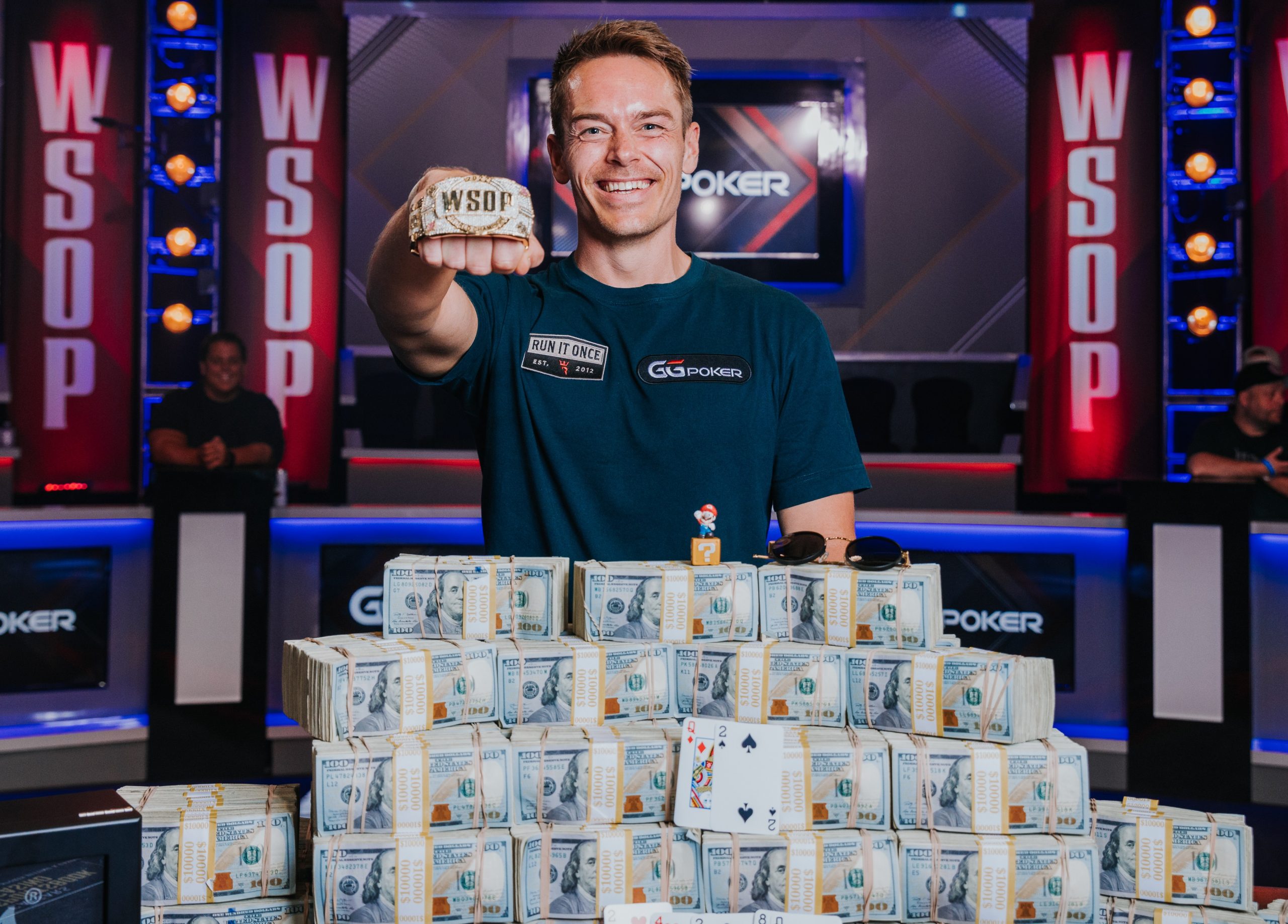 Alex Theologis has accused 2022 World Champion Espen Jorstad (pictured) of not paying him the $300K he owes him following an alleged Main Event swap. (Image: WSOP)

Jorstad brought the issue to light on Monday following an “uncomfortable experience” in Cyprus where he said someone indirectly threatened to hurt him. The Irish poker player who reportedly made the threat isn’t named, but he’s believed to be a friend of Theologis and demanded that Jorstad “pay the man his money” or be prepared to discuss the issue “outside.”

The money allegedly owed in this instance is 3% of Jorstad’s $10 million WSOP Main Event prize, an amount Theologis claims the pair agreed to swap prior to the tournament.

Jorstad explained soon after his victory that he wouldn’t be keeping the entire $10 million he won. In a tweet posted on July 26, he showed his full set of results for the summer. He had 14 swaps in the WSOP Main Event, all of which were between 1% and 7.5%.

For full transparency I had 14 different swaps (all between 1% and 7,5%) in the main, and ~56% of my own action. Very nice feeling to make my friends a lot of money! 🙌 pic.twitter.com/QtU2qoJ5lX

In total, he had 56% of his own action. That means he cleared $5.6 million after paying out the people he swapped action with. All was well until Theologis claimed Jorstad owned him 3%.

Jorstad’s TwitLonger post explains the issue in more detail and includes screenshots of the messages sent from Theologis. Those messages (see image below) show that neither player knew when they agreed to the alleged swap. There are also no prior messages or documentation confirming a swap. 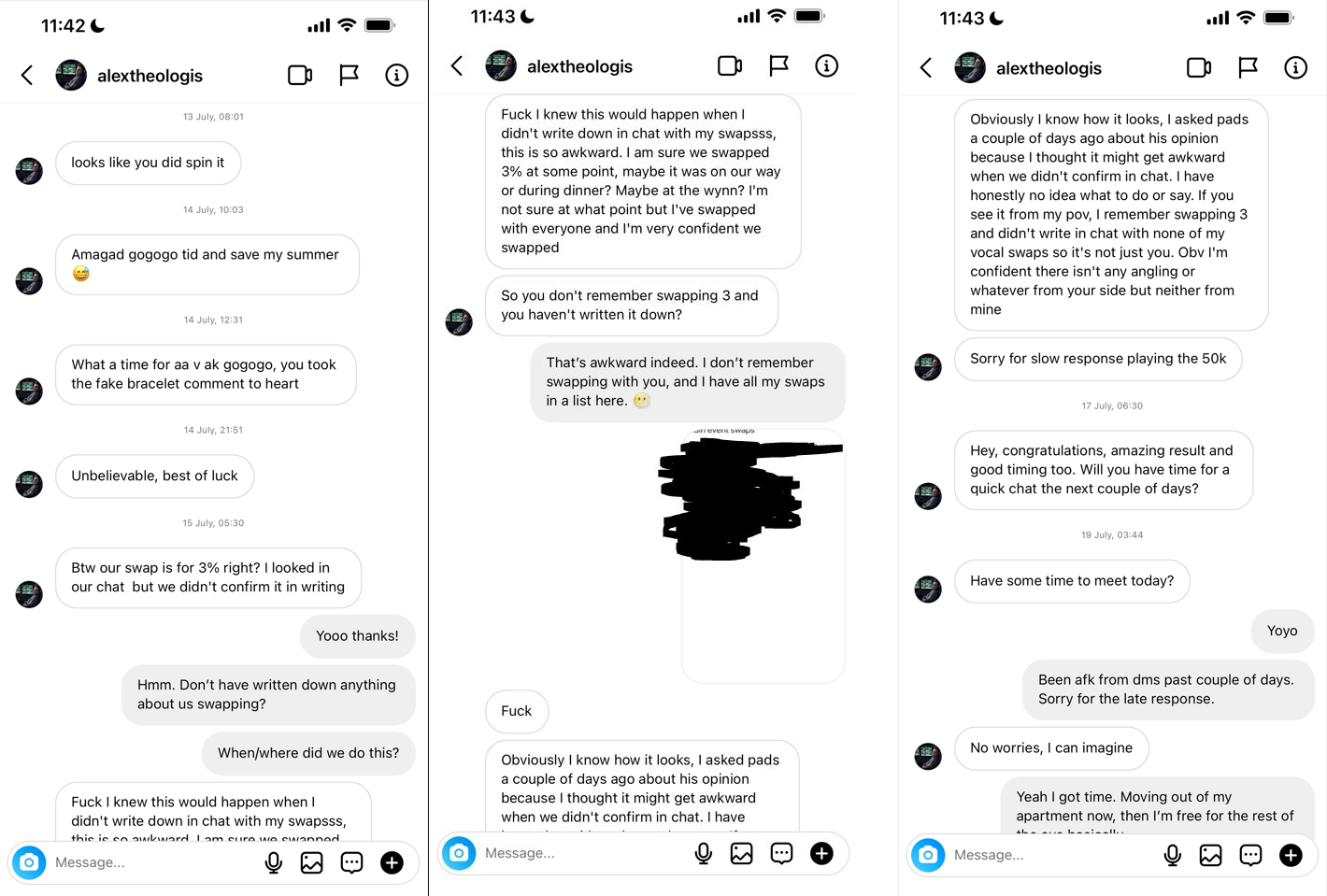 The two pros met in Las Vegas and discussed the issue. A message following the meeting (see image below) shows Jorstad clarifying his position that no swap occurred. Theologis responded by saying that he’s “disappointed” and feels “betrayed.” He ends the message by questioning how Jorstad can “sleep at night.”

A final message between Jorstad and Theologis. (Image: Espen Jorstad)

English pro, Patrick Leonard, has been brought into the discussion as he’s friends with both Jorstad and Theologis. He said that not writing down the details of a swap doesn’t necessarily absolve someone from the responsibility of paying what they owe. In essence, swaps can be made with a handshake agreement.

FWIW, if Espen and I swapped over dinner and didn't write it down I would 100% assume the swap was on, I've definitely verbally swapped with friends like Euro/Elmerix over dinner and not written it down, however Espen/Alex never swapping before online/live and only meeting twice https://t.co/mbQMq3wz2A

However, he also acknowledges that the swap may not have occurred. Jorstad and Theologis have never swapped before and, prior to the 2022 WSOP Main Event, they’d only met twice. Additionally, there are no chat logs referencing a swap, other than the ones after Jorstad won the Main Event.

Finally, neither party has a clear recollection of any discussions about swapping action. Theologis says he remembers they agreed to swap 3% but, other than this detail, he can’t remember much else.

Jorstad believes he doesn’t owe 3% of his $10 million prize ($300K), but he’s willing to accept the decision of his peers. He’s asked reputable players, including Leonard, Mike McDonald, and Isaac Haxton to contact him with their opinion.

For clarity, Theologis is a Greek poker pro and coach for a number of poker training sites, including Run It Once. This doesn’t necessarily add any validity to his claim, but it’s also worth noting that he isn’t an unknown figure within the poker community.

The court of public opinion is currently swinging in Jorstad’s direction. Poker pro and WPT commentator Tony Dunst pointed to the fact Jorstad wrote down all of his swaps, except the one claimed by Theologis.

I doubt anyone here is acting in bad faith. Given that you created written records for all swaps and have no recollection of the agreement, I’d say you don’t owe Alex anything. Awkward for sure, and good reminder to always confirm swaps/buys in text.

Pros Brian Rast and Josh Arieh had similar opinions, while David Peat, aka Viffer, stayed true to form and found a way to turn the issue into a bet.

Arbitration is the ultimate freeroll, If Alex wants it settled by third party ask him to bet an additional 100k on out come.

It’s never easy at the top and Jorstad is finding that out the hard way. The incident also demonstrates the fine line poker players walk when they swap action.

If Jorstad is wrong or his peers believe compensation is due, he will pay Theologis his 3%. However, it may take some time to untangle this already messy situation.