Swedish online pro Erik Sagstrom is back from the shadows after winning the WSOP Circuit Planet Hollywood No Limit Hold’em High Roller event in Las Vegas on Monday night.

The 33-year-old bested a field of just 26 players to take home $65,000 in the $5,300 buy-in event. Impressively, he joined the tournament on no sleep, having spent the previous night playing cash games. He beat second-place finisher Joe Kuether to take the top spot. 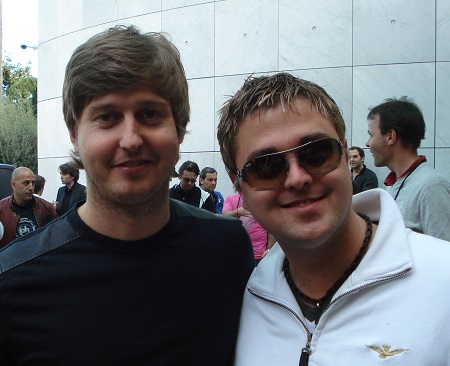 Erik Sagstrom (left, seen here with a fan in 2014) vows he’s back for good after taking down the WSOP Circuit Planet Hollywood High Roller in Las Vegas this week . (Image: bloggar.aftonbladet.se)

Sagstrom has been the subject of countless “Where are they now?” articles and internet threads. With several online handles, including Erik123,The Salmon, and The King of Ding, the Swede was once the most feared and successful high-stakes online poker player of his time. Sagstrom terrorized the high stakes tables between 2004 and 2007, at a time when Prahlad “Spirit Rock” Friedman and Johnny “bad_ip” Lodden ruled the nosebleeds.

Where in the World Was Erik?

He even had his own internet poker room, Erik123.com, which launched in 2007. Erik had also been a part-owner, along with Tony G and Gus Hansen, of the PokerChamps website, which was sold to Betfair in 2005 for €18 million ($20.26 million).

And then, he just disappeared. In 2009, he briefly reemerged to finish third in the $50k HORSE event at the World Series of Poker, and made a one-time reappearance at the same event in 2011. But after that: nothing.

There were rumors that he was bored with poker, and that he was holed up in a mansion somewhere in Sweden, engaging mainly in sports betting. Those rumors appeared to have been confirmed in his post-game interview with WSOP.com.

“I wasn’t really playing poker for a long time,” Sagstrom told WSOP.com. “I was in Sweden and I was doing some different things. I was betting sports and not really playing much poker over the last four years.

“I’ve been doing a little of this and a little of that and then I came [to Vegas],” he continued. “I wasn’t planning on playing much, but once you’re here, you get sucked in. Life is crazy and the degenerate that I am, I play all the time now.”

Sagstrom appeared in Vegas at the beginning of the WSOP, reportedly plunged straight into the high-stakes cash games, and hasn’t left since.

“It feels good,” said Sagstrom of his tournament win. “I’ve been up for the better part of 36 hours, so I’m a bit tired. But it’s a good finish to the day. Or maybe two days.”

So poker welcomes back its prodigal son, and this time, it seems, he’s back for good.

“I’m going to travel and I’m going to play a lot of poker tournaments,” he promised. “I’ll be around.”