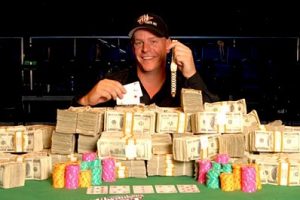 Despite some massive tournament wins in recent years, Erick Lindgren is being sued by PokerStars for more than $2.5 million. The poker pro has been hit with some turbulent financial waters, allegedly due to a gambling problem. (Image: boringpoker.com)

Former Full Tilt poker pro Erick Lindgren is being sued by the Rational Group, parent company of both PokerStars and Full Tilt, for more than $2.5 million, as the company is hoping to recoup a debt that goes back to the days when Full Tilt Poker was an independent poker room, before Black Friday.

The debt covers two separate sums that Lindgren received from Full Tilt: a $2 million sum that was accidentally deposited into his bank account, and a $531,807 loan that he allegedly failed to pay back.

The larger sum came from an instance in April 2011, when Lindgren asked Chris Ferguson, one of Full Tilt’s owners, to loan him $2 million. Ferguson agreed to do so, but the amount somehow ended up being transferred to Lindgren’s account twice, and he did not return the second payment.

“Various officers of Full Tilt corresponded to Lindgren requesting that Lindgren return the full amount of the erroneous deposit, which Lindgren failed to do,” the lawsuit states.

According to the suit, which was filed in United States District Court in Nevada, PokerStars and the Rational Group have tried to recover the debts since then, but have not found Lindgren to be cooperative.

“To date, PokerStars and its counsel have not received any response to the request for payment, which caused PokerStars to file this complaint in an effort to preserve its legal rights,” the company wrote in its complaint.

There is speculation that this could be just the first of several attempts from PokerStars to recoup money that was originally owed to Full Tilt Poker by some of the site’s more well-known professional players, many of whom were allowed to borrow enormous sums while Full Tilt was operating in the United States.

The Rational Group took on that debt when they bought Full Tilt’s assets from the US Department of Justice following the Black Friday debacle.

Lindgren Known to Have Gambling Issues

The lawsuit is just the latest in a series of stories that have shown Lindgren to have issues with gambling addiction and an inability (or perhaps unwillingness) to pay back debts to other well-known gamblers. In 2012, infamous sports bettor Haralabos “Bob” Voulgaris made a post on the Two Plus Two forums saying that Lindgren had owed him a substantial amount of money for years.

“I have never met anyone who was as big a prick about paying off his debts as Erick,” Voulgaris wrote at the time. “I have never met a guy who was guaranteed as much money as Edog was from his [Full Tilt] investment, who spent money as lavishly as he did, who was basically allergic to paying his debts.”

Lindgren did eventually attempt to deal with his compulsive gambling issues.

He filed for bankruptcy in 2012 in an attempt to clear himself of $4.8 million in personal debt and another $3.8 million he owed to the IRS, though the courts did not eliminate his debts to Full Tilt as a part of that process.

In November 2012, Lindgren entered a rehab program at Morningside Recovery in an effort to get help. Still, these issues haven’t stopped Lindgren from playing in some of poker’s biggest events over the last two years.

as sensationalized and hyped up poker has become, we have to remember it seedy underbelly roots; gambling can be a very slippery slope. and at those nose bleed stakes, it’s easy to get lost in it all.

Give our favourite poker engine their money back you uncontrollable gambler!