Poker player Quan Zhou committed an unforgivable angle-shoot during the EPT Barcelona Main Event, according to a consensus of pros on social media. Although video evidence isn’t always conclusive, his apparent bluff-fold in a hand against Nikolay Ponomarev was certainly questionable, at the least. 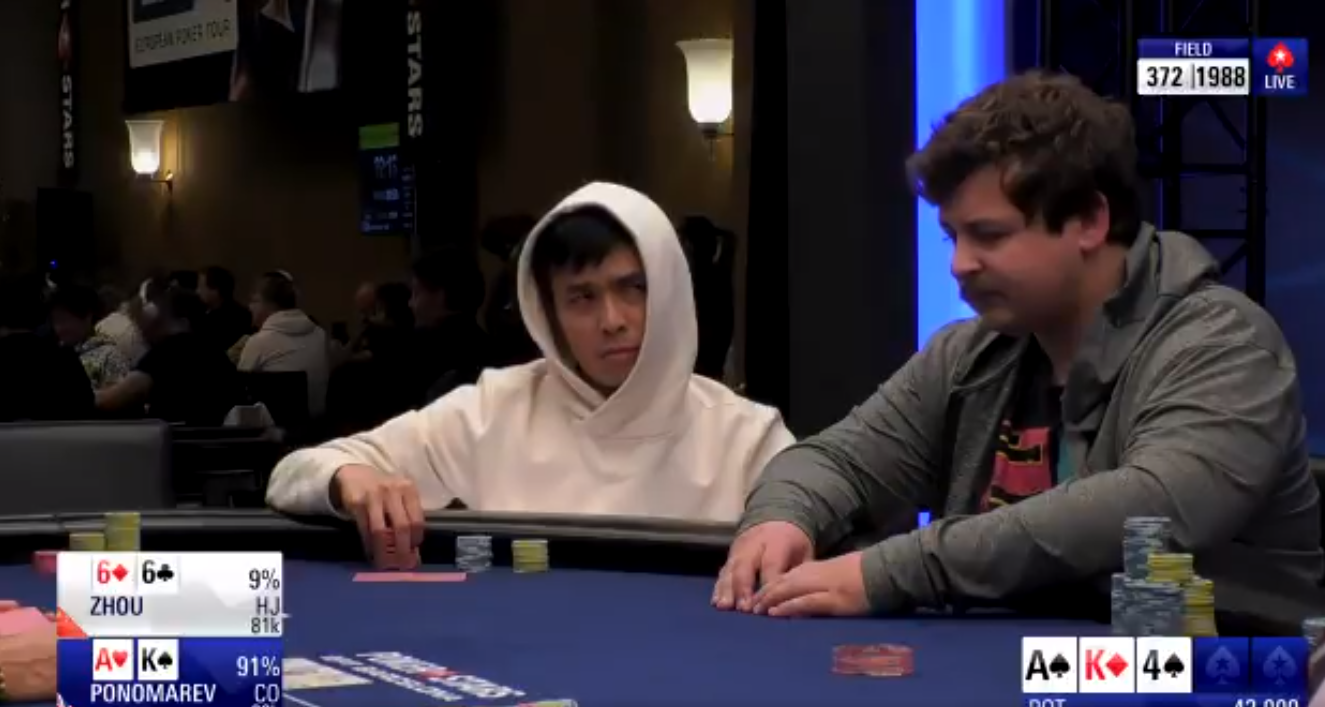 Did Quan Zhou angle-shoot or was it a mere accident? (Image: Twitch)

The €5,300 Main Event began with 1,489 players. After Thursday’s Day Three session, it’s down to 48 grinders hoping to get their hands on the €1,659,000 first place prize. Pasquale Braco from Italy holds the chip lead heading into Day Four on Friday with 2.8 million chips. He’ll be facing some stiff competition with some talented pros still kicking, including Super High Roller Bowl V champion Issac Haxton.

But the exciting tournament has been overshadowed a bit by a controversial hand involving two players who didn’t even make the money.

It certainly didn’t look good. But did Zhou intentionally angle-shoot in a hand against Nikolay Ponomarev? Or, was there no intent to trick his opponent into believing he was folding his cards? We’ll let you be the judge based on the following video.

In the hand on Day Three during the EPT Barcelona Main Event, Zhou opens to 6,000 with pocket sixes. Ponomarev then puts in a three-bet to 18,500 with A-K. Action is back on the original raiser who takes a moment to ponder his tough decision. Facing a re-raise with a small pocket pair puts a player in a difficult spot.

After taking a moment to think about his next move, Zhou appears to fold his cards. With two fingers, he moved the cards a few inches towards the dealer, seemingly signifying a fold. But he then takes his cards back to indicate he isn’t yet ready to give up on the hand.

While Zhou was in the process of either unintentionally folding or fake folding, Ponomarev slightly lifts his cards, partially exposing them to other players. Zhou appears to take a glance at his opponent’s hole cards before putting in a call.

The flop came A-K-4, giving Ponomarev top-two-pair. He bet out and, with minimal hesitation, Zhou folded. And this time it was for real. Although the hand wasn’t consequential in terms of pot size, it caused a stir around the EPT Barcelona Main Event.

What the Poker Community is Saying

To say Zhou, who busted out as the WSOP Main Event “bubble boy” in 2017,  is taking a beating from poker fans on Twitter would be an understatement. Most who responded to the PokerStars social media account tweet felt he angle-shot. CardsChat asked Joe Stapleton, the Twitch announcer who commentated on the hand. He certainly questions Zhou’s motive but stopped short of bashing the possible angle-shooter.

“I am happy to question the motive and say it sure looks like an angle-shoot,” the comedian told CardsChat News. “But I genuinely believe it was not cheating and difficult to tell if it was premeditated or he just changed his mind in a very shady an uncool way.”

Others weren’t as politically correct. Poker vlogger Jeff Boski shared a screenshot that appears to show Zhou taking a peak at his opponent’s cards.

Nothing to see here! pic.twitter.com/1Xy275ZAIt

Hendon Mob executive Eric Danis wrote, “that was gross,” in response. Randy “nanonoko” Lew, one of the top online pros and a poker commentator, said that Zhou’s move was “clearly an angle-shoot.”

Twitter user @999William999 asked, “who wants to play cards with someone like that,” a jab at Zhou’s character. Allan Pike (@RagingAl_HS) said it was “100%” an angle and “not just the card movement but the stacking the chips looking to pump fake too. Doing everything he could to get a reaction from his opponent.”

Many poker fans suggested Zhou deserved a penalty. In the end, however, the hand didn’t have much, if any, impact on the outcome of the tournament. Neither Zhou nor Ponomarev are still alive or cashed in the EPT Barcelona Main Event.

In my opinion, he really angle shooted, but I didn’t know that was wrong. We humans are complicated.