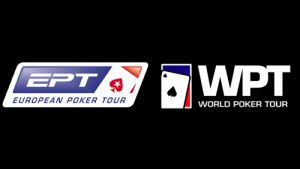 The WPT announced their busy Season XIII which will span four continents, while the EPT will hold a huge event in Barcelona later this year. (Image: calvinayre.com)

Sure, the World Series of Poker (WSOP) is getting all the headlines and coverage this time of year, but there are two other major poker tours that still want some headlines of their own. The European Poker Tour (EPT), which has strong ties to PokerStars, and the World Poker Tour (WPT) have each published their schedules to round out the rest of 2014. Both tours will offer tournaments held around the world, some offering six and even seven-figure top prizes.

The World Poker Tour announced their plans to hold 20 tournaments globally in the first half of Season XIII, which will be held through the rest of 2014. In fact, the WPT will boast tournaments held on four different continents, with buy-ins aimed at all levels of players.

WPT President Adam Pliska said, “Season XII was a monumental year for the World Poker Tour and our partners around the globe. From the WPT World Championship held for the first time at the Borgata Hotel Casino & Spa, a 1,795 record-setting field at the WPT Seminole Hard Rock Poker Showdown, and a greater than 50% increase in our viewership on FOX Sports Networks to our new collaboration with DeepStacks Poker Tour and three multi-year partnership deals with DraftKings, Monster Headphones, and Swiss luxury watch brand Hublot, we couldn’t be happier with our expansion during Season XII or more excited about our plans for Season XIII.”

The WPT opened Season XIII with the Gioco Digitale WPT National Campione in Italy, beginning on June 5th. From there, the tour will head to London in July for the partypoker WPT National UK: London event starting on July 3 at Aspers Casino. This event is just £200, making it the most affordable WPT tournament to enter.

On July 4, the WPT will head to Las Vegas in the United States for the WPT500 held at ARIA Resort & Casino. This tournament has a low buy-in at $565, but offers an incredible $1 million guaranteed prize pool.

After Las Vegas, the WPT will go to Spain for two National events starting on July 15. Then they will head to the Grand Casino Brussels on July 18, and then go to the Western Poker Challenge from the Atlantis Resort & Spa for the WPT Regional. The tour will then head to California for the first televised Main Event of the season, the famed WPT Legends of Poker from the Bicycle Casino in Los Angeles on August 23.

In September, Europeans will be playing in the partypoker WPT Merit Classic North Cyprus, which features a $1 million guarantee. The United States will host the WPT Borgata Open come September 14, and once it is completed, the same venue will host the televised Monster Invitational, which features three Monster Headphones celebrities who will compete against three poker pros – all for charity.

Busy Schedule for the EPT