There must be something about Morocco that agrees with Fadhil Farag. The businessman won his third event in the country, taking the Marrakech Poker Open High Roller Saturday at the Casino de Marrakech. 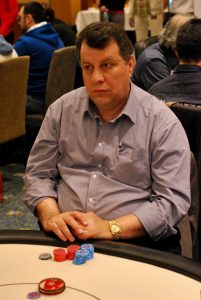 Fadil Farag has had lots of success playing in Morocco. He has won two previous events in the country and took his third Saturday, claiming the Marrakech Poker Open High Roller. (Image: Pokerskull.com)

“I played good and I was so lucky. I’m very happy,” he said. “It was a very happy finish to this tournament.”

He was not so fortunate in the Main Event. He got his aces cracked by a king-jack held by Lasse Jacobsen.

There were 37 grinders on Day 2 and it took until well after sunset to get a final table. Abdelhadi Kondah and Houssein El Otmani, both from Morocco, were the last two eliminated to set the final nine.

Sebastien Compte was the first to get knocked out and he was followed by Arthur Conan. Fernando and Paul Guichard went to the rail shortly thereafter. Jerome Sgorrano had the least amount of luck, losing most of his chips with pocket sixes to a pair of eights held by Said El Yousfi. Short stacked he made a play to get back in it with aces but they were cracked by El Yousfi’s 10-9 when he got a 10 on the turn and the river.

The four remaining players proposed doing a four-way chop but it was turned down and Farag sent Ouassini Mansouri home to get the table to three.

Farag ended the evening as the chip leader, holding a 2 to 1 edge over Phu Truong and a 12 big blind advantage over El Yousfi.

On the final day it only took Farag eight minutes to rid himself of the other two. Truong was dispatched when his A-10 couldn’t conquer Farag’s KK.

Soon after Farag got another pair of kings and when El Yousfi went all in with A2 following a flop of AA10, Farag quickly called. Yousfi held the advantage with the set and then turned pale when a king came up on the turn for Farag’s full house.

“Honestly, when I started this tournament I had a lot of luck,” he said. “I’ve never had such luck in my life in tournaments. So you see, I came in and suddenly I am up. So you must have also luck, not just only experience.”

He must be the luckiest guy in Morocco. He not only won this event, but has been victorious in a Morocco Hold’em Main Event in 2013 and a No Limit Tournament in 2011 in the country.

Good to be lucky turning the boat. No way a Set of aces folds in that situation.