By topping a field of 380 entries, Zajmovic earned $200,769 and a $15,000 seat into April’s season-ending Tournament of Champions at the Seminole Hard Rock Hotel and Casino. 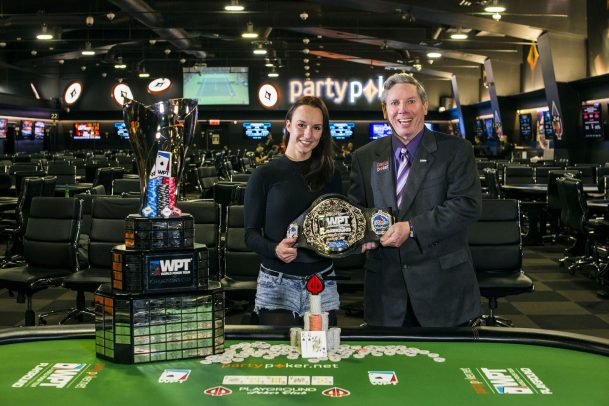 Ema Zajmovic topped a field of 380 entrants to win the partypoker.net WPT Playground for $200,769, making her first woman to win a WPT open event. (Image c/o of WPT & Joe Giron)

Zajmovic Representing Woman of the World

Last November, Zajmovic made the final table of the WPT Montreal, which was won by Mike Sexton. Zajmovic finished fifth in that event for $76,108, and she clearly made an impression on the Poker Hall of Famer.

“Trust me, she can really play,” Sexton said of her in a tweet. He added that “she is tough” and that the poker world will “see a lot more of Ema in the future.” Due to her aggressive style and ability to intimidate the table, he also described her as a combo of Phil Ivey and Vanessa Selbst.

Zajmovic, a Montreal cash game pro who qualified for the tournament via an online satellite, had to overcome a chip disadvantage during heads-up play against Jean-Francois Bouchard.

She then called the shove with her K♠Q♠ and was looking to improve against Bouchard’s A♠9♠. She did just that after the board ran out K♣10♥7♣Q♥5♠ to give her two pair and the win.

“Honestly, I am really happy that I proved women can do it,” Zajmovic told WPT officials after the win. “The funniest and nicest part of this experience was all the women who came and were so supportive of me. It was amazing. When I started playing poker, there was so much competition between girls. It was hard to be good and be supportive of each other. Now it has evolved so much and it is nice to see I had support from older women, younger women.”

The win also vaulted Zajmovic to fourth on the Hublot WPT Player of the Year race.

Pros Turn Out in Force for WPT Playground

Zajmovic’s win captured the headlines, but there were several other well-known pros who did well at the latest WPT stop. Eric Afriat was the last remaining Champions Club member remaining, but he saw his quest for a second WPT title come to an end in third place for $83,608.

The WPT now heads to Fallsview Casino Resort on the Canadian side of Niagara Falls for the WPT Fallsview Poker Classic from February 22-24.

She’s beautiful! It’s rare when a girl in the combined two qualities, intelligence and beauty!)