“ElkY” Grospellier: No Passport, No Luggage, No Problem!

Bertrand Grospellier was known as “ElkY” long before poker, from his days as a world-renowned gamer. But since he pounced on the poker scene about a decade ago, he has earned the respect of fellow poker players around the world. His hair color and bedazzled shirts may change, but his undeniable force at the tables is a constant. 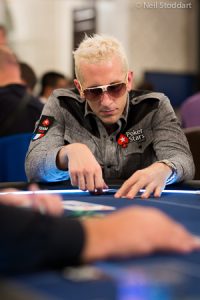 ElkY has been coming to the World Series of Poker since that time, notching his first cash in 2006 and his first WSOP final table in 2009. No Limit Hold’em was his game then, but he has since expanded his repertoire to include all mixed games. His proficiency began to show in the years that followed, especially considering that his WSOP bracelet came in the 2011 $10K Seven Card Stud Championship.

Last year, ElkY had three WSOP cashes, one being a seventh place finish in the $5K Pot Limit Hold’em event, and he couldn’t wait to return this year.

But when his passport was stolen in May, the Frenchman had to get from Toronto to Paris for an emergency meeting for a passport replacement. It all happened faster than expected, but he arrived in Las Vegas without luggage. He tells us the story, as well as how he’s been coping with the kinks in his summer plans.

We caught up with him on Day 2 of the $10K HORSE Championship, and at the dinner break, he was the chip leader of the 52 remaining players. He finished at the bottom half of the 21-player field later that night, and he was more than a little determined to make a deep run on Day 3.

CardsChat (CC): Tell me a little about your passport issue.

Bertrand “Elky” Grospellier: Yeah, that was really bad. I went to Toronto with my girlfriend and Eugene [Katchalov] because we went there to play SCOOP on PokerStars. I like to play from Canada because the time zone is nice; from Europe, you have to play all night long for two weeks. I did it once for the WCOOP, and it was pretty exhausting. When I arrived at the Toronto airport, my bag was stolen when I was about to take a cab. And that meant I couldn’t even play SCOOP because everything was in that bag – my passport, credit cards, watches, and my RSA token for PokerStars.

At that point, I could only go back to France, to the French Consulate. Then I had to deal with French bureaucracy. They don’t allow passports for emergency work reasons anymore, so even though I got a letter from my sponsor regarding my contractual obligations, they couldn’t do it.

I ended up getting pretty lucky because it could’ve taken a month or more. There were only a few places I could get an appointment in Paris because I actually live in London. And it was the worst timing because I got my last passport just before they did the biometric ones. The French Consulate had to get in touch with the London Consulate, so it took forever.

It was a bit upsetting because it was the first time in six or seven years that I didn’t play the first World Series of Poker event. But on the other hand, I got to relax a little bit. I try to stay positive because it’s not the worst thing that could happen.

Of course, I missed a few events, but I’m still pretty happy I got to Vegas as soon as I did. I only missed about a week and a half.

CC: You originally thought you weren’t going to get an appointment until June 20, right?

ElkY: It was much better than I thought. And I got to chill out in Paris. There are way worse things in life than missing a week of poker because of being stuck in Paris.

CC: And then your luggage didn’t make it?

ElkY: Yes. None of the luggage on the flight made it. There was an IT problem in the airport. The flight was full from London, and there were about 400 people on it. None of the luggage made it. If an airline misplaces a couple pieces of luggage, they can send it on the next flight, but because there was luggage for 400 people, they can’t do that because they don’t have space. They didn’t even send 50 percent of them yet, so I hope I can have it tonight or tomorrow. It’s chaos, though, because I have to be on hold for 40 minutes or so; there are so many people calling. It’s annoying, but it’s okay.

CC: Where are you staying this summer?

ElkY: I’m staying at the MGM Signature for the first time. I like it because it’s quiet. I like hotels like this or Vdara because it’s not distracting and it’s away from the Rio. I don’t want to stay too far away in houses, though. Making so many trips to the Rio every day, after a while, it wastes a lot of time. I try to be very efficient, so commuting wastes time for me.

CC: With everything you’ve gone through to get here, did you feel ready to play when you finally arrived?

ElkY: Yeah, I was really ready to play. I was more eager to play since I missed it and couldn’t start when I wanted to. I hadn’t played live since the EPT Grand Final, and it had been a month. The World Series is a very exciting time. I used to come to Las Vegas a lot, and now I basically just come for the summer but I like it here. It’s nice here.

CC: You have a pretty healthy workout and nutrition routine. How do you plan to incorporate that into your WSOP?

ElkY: Nutrition and preparation are very important. I wasn’t very happy before coming to Vegas because when I spent time in 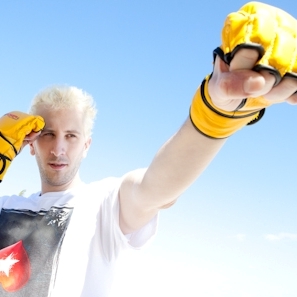 Exercise is a key component of staying mentally focused for ElkY (Image: PokerStars)

Paris, I wasn’t busy at all. My girlfriend and I like to eat out, so we did that. When I play poker, though, it’s much easier to have a good routine because I eat less in order not to get distracted when I play. And when I’m focusing on the game, I do eat, but not too much. I fast at least once per week, and I try to work out four to five times a week. It depends on the tournament schedule.

I worked out this morning, actually, but I didn’t want to because we finished the tournament last night at 3am. I had to work out at 9:30 this morning with our trainer. I didn’t sleep well but went to work out anyway.

You have to prioritize, and the most important thing – if you can get it – is sleep, then nutrition, and then work out. All of it is important because it’s a really long summer of poker, and you want to stay fresh until the end, especially since the Main Event is at the end.

CC: So, is it easier to work out when you’re on a poker schedule?

ElkY: Not always. The World Series is hard because there are so many tournaments, and I want to play most of them. Some players choose certain tournaments, but I like to play every one if I can. It’s easier for me to eat well during this time, but it can be hard to keep a good workout schedule after playing poker 12 or 14 hours per day.

CC: So you’re not playing the One Drop?

ElkY: It’s very unlikely. I would have to sell so much action, and I don’t like to do that. It’s a headache. And this One Drop isn’t going to be as prestigious as the first one. I thought it was going to be something unique, but now it looks like they’re going to have it every couple of years. I’d like to play again and win, but it’s too much of a hassle to do it. And I’d rather focus on the other events.

CC: Would you say the $10K Heads-Up is your favorite event?

CC: What is your absolute favorite game?

ElkY: I’ve been liking Deuce to Seven Single Draw and Triple Draw, and No Limit Hold’em, of course. I don’t really like PLO; I never liked it as much as other limit games.

CC: So, you’re on the dinner break of this HORSE tournament, and you’re the chip leader with more than 300,000 chips. You were down to 30-something thousand chips earlier.

ElkY: Yeah, I lost kings to aces to Mizrachi early on, but luckily for me, it was Limit. Mike is really aggressive, so that was unfortunate. But I moved to another table and ran really good in Stud and some other games. I’m running good, and it’s nice to have 350K, but there’s still a long way to go with 52 players still in.

But I’m feeling good. I usually don’t get to play mixed games live, and not even much online because in France, the French PokerStars site has only Hold’em and Omaha due to the stupid law. When I travel the European circuit for the EPTs, they usually have mixed game events at the same time as the High Roller tournaments, so I can’t play them there either. That’s why I’m enjoying them so much here at the World Series.