Eli Elezra Mansion Up For Grabs, If You Have $2 Million To Spare 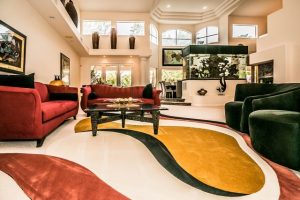 Eli Elezra is putting his Nevada luxury home up for sale. It’s yours for a cool $2 million, or 200 WSOP Main Event buy-ins. (Image: Vegas One Realty )

Eli Elezra, the former Full Tilt poker pro who was a regular on High Stakes Poker, is reportedly putting his Las Vegas home up for sale.

Priced at just under $2 million, the 8,842-square-foot luxury house is situated in The Fountains community in Green Valley, Henderson in Nevada.

Real estate giants, Vegas One Realty, have been busy talking up the poker pro’s soon-to-be-former abode, promoting the “leafy canopy”, “tall ash trees” and “guarded gate” outside the property, before highlighting such delights as six bedrooms and six bathrooms, marble floors, two-sided fireplaces, a 1,000-gallon aquarium, and an elevated dining room.

Also included in the house is Elezra’s office, which includes a 70” flat-screen TV, fireplace and wet bar. There are his and hers walk-in closets, a 1,000-square-foot casita with its own kitchen, bedroom and bathroom,

Private poker games and barbecues can easily be hosted in the outdoor kitchen which has enough space for three tables seating 20 people.

From Israeli Army To WSOP Champ

First honing his poker skills while serving in the Isreali army, Elezra soon found a natural home in Las Vegas where he became a regular at the big cash games.

As well as recording over $2.5 million in live tournament earnings, he was a former Full Tilt sponsored pro and made numerous appearances on hit TV show, High Stakes Poker.

Fancy turning some of those poker winnings into the property market? Here are a few more of the features of Eli’s home:

How The Rich Players Live

Elezra bought the Henderson property in 1999 mainly to be near his children’s school, Green Valley High School.

And while the house is certainly luxury all the way, it’s pretty conservative compared to those sold by other famous poker pros.

With Black Friday stunning the poker community, and Galfond having to leave for foreign climates to find some online action, the apartment was swiftly put on the market.

We say “apartment”; what we actually mean is two apartments which were connected via a frankly ridiculous metal slide adjoining the penthouses.

The slide was designed by Turrett Collaborative Architects and consisted of half-tube stainless steel parts to create an 18’ focus point for parties.

Situated in the East Village’s party capital of A Building, Galfond’s connected penthouses included a solid glass pool table and stunning views across the city.