Election Day Results Could Be Precarious for Online Poker 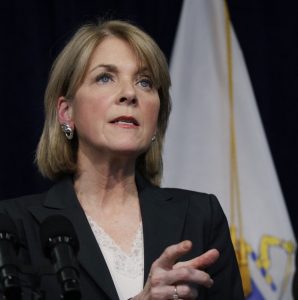 Martha Coakley was the only member of the PPA’s “Jokers” list to lose her bid for election on Tuesday. It remains to be seen how results will affect online poker overall. (Image: AP/Elise Amendola)

Tuesday’s US Election Day results may have left online poker players with more questions than answers, as while few results directly impacted Internet gambling, the overall outcome could prove meaningful at the federal and state levels.

The major headline of the night, of course, was the takeover of the Senate by the Republican Party, as the GOP picked up more than enough seats to ensure a majority there.

Combined with their existing majority in the House of Representatives (which was easily maintained), this will give Republicans significant legislative power, particularly on issues that wouldn’t provoke a veto from President Barack Obama.

It’s uncertain what would happen in that respect should any bills regarding online poker hit the president’s desk. But what’s clear is that Republican majorities in both houses make it more likely that legislation that would ban Internet poker will be debated, voted on, or potentially even passed into law.

That’s because most of the legislators who are vehemently against online gambling come from the GOP, which added a plank that called for a ban on online poker (and Internet gambling in general) to their 2012 platform. Sheldon Adelson, the Las Vegas Sands chairman and CEO who has strongly opposed online gambling, is also a major Republican donor, which has helped him build some support for such a ban within the party.

Does this mean that we’ll be seeing online gambling bans voted on in Congress over the next two years? Not necessarily.

Republicans are far from unified in their opposition to online poker, with more libertarian-minded lawmakers in particular tending to be against such bans at the federal level. Online poker is also a relatively low-profile issue; combine that with the fact that it could be divisive among party lawmakers and their constituents, and there’s a reasonable chance it could sit on the back burner.

On the other hand, those who are looking for a ban on Internet poker also know that they don’t need the full support of Republicans to potentially pass such a bill. There’s no party line for online gambling in the Democratic Party, and there are certainly those across the aisle that are against Internet gambling for a variety of reasons.

It’s unlikely to happen, but were an online poker ban to be passed in the next Congress, the most realistic scenario would probably involve a large percentage of Republicans voting with a small but significant number of Democrats in each house.

As for individual race results, there were few surprises that would impact the landscape for online poker.

Taking a look at the Poker Players Alliance‘s “Jokers” list, only one of the 22 politicians that were highlighted for their anti-poker stances failed to win their race on Tuesday night. That one loss belonged to Martha Coakley, the Democratic candidate for Governor in Massachusetts.

Coakley, who lost a close race to Republican Charlie Baker, was targeted by the PPA because of multiple statements she had made against online poker and gambling in general during her time as the Massachusetts Attorney General.

In other gaming-related results, an attempt to repeal the Massachusetts casino law that has allowed for the licensing of up to three casinos and a slot parlor was easily defeated, allowing plans for casinos in Springfield and Everett to go forward. In California, voters rejected Proposition 48, which would have allowed a Native American tribe to build a casino off of its reservation, which could have set a precedent for expanding Indian gaming beyond tribal lands.