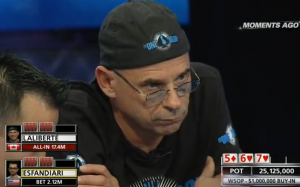 Guy Laliberte has announced 35 players are registered for the €1 million buy-in Big One for One Drop on October 14. (Image: bluffeurope.com)

There are 35 players registered for the highly anticipated €1 million Big One for One Drop poker tournament on October 14th at Casino De Monte-Carlo in Monaco.

All players are recreational. Pros aren’t allowed in this unique poker event. The names of the players likely won’t be made public until the start of the tournament.

Previously, the tournament was held at the World Series of Poker in Las Vegas in 2012 and 2014. Pros, along with wealthy recreational players, competed for millions of dollars and a WSOP gold bracelet.

This year’s Big One for One Drop has the largest buy-in in poker tournament history since 1 million euros is worth more than the same amount in US dollars. Re-buys are available.

It may seem strange but poker and winning money isn’t the main focus of this €1 million buy-in tournament. Charity is.

Guy Laliberte, a recreational poker player who has competed in numerous high stakes games including previous Big One for One Drop tournaments, is the founder of the One Drop foundation. The charity helps ensure people all over the world have access to clean water.

Laliberte, also the founder of Cirque du Soleil, created this event to help his foundation raise money. From each buy-in, €111,111 will be donated to One Drop. With the current 35 players registered, the prize pool is at €31,111,115 and the €3,888,885 will be headed to Laliberte’s charity.

Laliberte projects many players will re-buy for the Big One for One Drop. But he also wants to make recreational poker players aware extravaganza isn’t a one-tournament event.

“I want to remind players that there are still seven other tournaments and cash games, including a one million euro cash game, to be played during the week at what promises to be the biggest charitable poker event ever held, with proceeds going to One Drop,” the businessman said in a press release.

Among the other tournaments include a €100,000 buy-in event on October 17. Blind levels will last just 20 minutes, and €3,500 from each buy-in will be contributed to One Drop. Players can satellite into the Big One for One Drop for as “little” as €10,000. For all events, only recreational poker players will be allowed to register.

On the extravaganza’s final day, October 17, a €1 million cash game will take place in Monte Carlo. Players for the cash game haven’t been announced.