Dzmitry Urbanovich, Poland’s #1 player with more than $5 million in live tournament cashes, is the newest member of Team partypoker. The internet poker site announced the sponsorship deal on its blog Thursday. 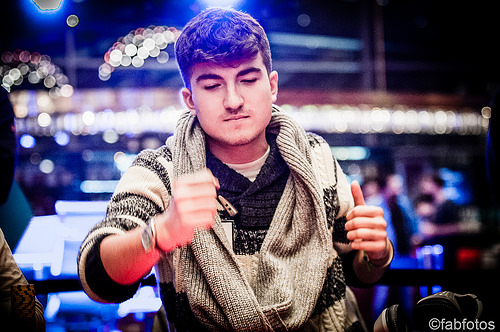 Dzmitry Urbanovich of Poland is the newest member of Team partypoker, joining a roster of the game’s superstars, along with celebrities and athletes. (Image: fabfotos)

The Belarus native, who currently lives in Poland, joins one of the most recognized brands in the industry. A high-stakes live and online pro, Urbanovich said he “can’t wait to join the partypoker team.”

Being an ambassador for any poker site requires one to wear a company patch during live events. Dzmitry will be sporting his new employer’s red and black logo at the upcoming partypoker Million North America. This tournament series takes place at the Playground Poker Club in Montreal and guarantees CAD$1 million in prize money to be awarded.

Urbanovich is no stranger to major poker tournaments. In less than four years, he’s accumulated just under $5.2 million in winnings in live events. His largest score, $1.6 million, came in 2015 in an EPT Monte Carlo Super High Roller.

Urbanovich’s closest competitor, Dominik Panka, has won “just” $2,650,000. Given that the leader competes in numerous high roller events, it will be difficult for anyone else to catch up any time soon.

He’s also one of the youngest online poker ambassadors in the world. At just 21, he’s barely old enough to compete in most casinos when traveling to the United States. He began playing cards at a young age and, clearly, chose his career path wisely.

Urbanovich was a member of the Global Poker League’s Moscow Wolverines during the league’s first season. His team made the GPL playoffs, but didn’t win the title.

Urbanovich is joining a talented team of poker pros and a former tennis star (Boris Becker). WPT commentator and champion Tony Dunst is a partypoker ambassador. Sam Trickett, one of the top high stakes cash game pros in the world, is also part of the team.

But there isn’t a bigger name in poker than Mike Sexton. Many see the Poker Hall of Famer as the face of the World Poker Tour. And he is. But, he’s also the brains behind partypoker.

Sexton chose the poker site’s name in 2001 and helped launch it to boot. Without the poker legend, no one knows if this site would have ever made it. The WPT champion and commentator has made millions away from the felt from partypoker over the past 16 years. And he’s still around, welcoming new, young ambassadors, such as Dzmitry Urbanovich, into the fold.