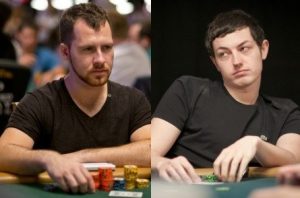 The Durrrr-Jungleman12 challenge could be back in business and will be played out over the next nine months, according to Daniel Cates. (Image: flopturnriver.com)

The Durrrr Challenge is back on, or at least that’s the word from Daniel Cates, aka “Jungleman12.” Cates has been pressing to reinstate the challenge ever since it was disrupted in mid-flow when the events of Black Friday pulled the plug on Full Tilt and its high-stakes tables.

Tom “Durrrr” Dwan, meanwhile, has been accused of procrastinating over the nosebleed heads-up matches ever since.

Dwan and Cates have played around half of the 50,000-hand challenge, with Cates out in front by roughly $1.2 million.

“Tom and I have had some disputes, but I believe we have essentially resolved them,” Cates said on the Two Plus Two forums. “The challenge is agreed to be played out in the next nine months (God willing). I think Tom intends on finishing the challenge, but has been distracted by things of great importance… In addition, Black Friday greatly hindered our progress.”

Tom Dwan was the undisputed King of Online Poker in January 2009 when he issued the million-dollar challenge to all-comers, with the exception of Phil Galfond.

Dwan would play anyone apart from Galfond heads-up, he said, four-tabling NLH or PLO at $200/$400 or higher.

What’s more, he would offer his opponents 3:1 on a win, which meant that if they beat him over the 50,000 hands, they would receive $1.5 million on top of the figure they had won.

Neither of the two challenges eventually agreed upon, Durrrr versus Jungleman nor Durrrr vs Antonius, were ever played out to completion.

Part of the problem was the length of time needed to play through 50,000 hands, with the payers’ time commitments turning them into fitfully protracted affairs.

While the Antonius match appears to have fizzled out amicably, the unfinished Jungleman match has become a source of bitterness between the two players.

The challenge resumed very briefly in 2013, with around 62,000 hands played, but since then Cates has accused Dwan of stonewalling.

“The latest with durrrr is that he is being totally uncooperative,” Cates told PokerListings.com towards the end of last year. According to Cates, Dwan had agreed to pay a $40,000 penalty for every two months that he didn’t participate in the challenge. By September 2014 he had accumulated $300,000 in penalties, none of which he had paid, Cates said.

“He failed to uphold any promises he made to me,” complained Cates. “He’s extremely frustrating. It’s outrageous.”

It appears that the two players have ironed out their differences, although whether this equanimity will remain intact over the next 25,000 hands is another thing entirely.