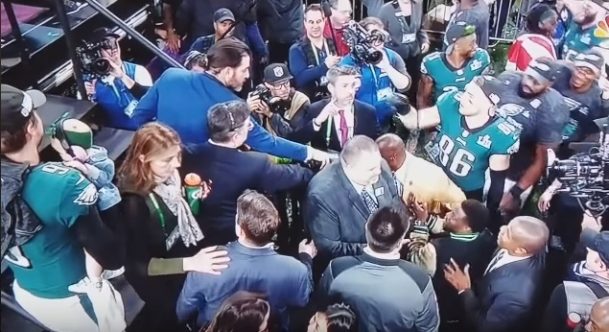 Two videos of Kevin Hart at the Super Bowl send the internet into hysterics. (Image: YouTube)

The Hollywood funnyman is used to getting access to the world’s glitziest events, but not even his smile could get him past a burley bouncer following the Philadelphia’s Eagles Super Bowl win.

As the Eagles’ finest celebrated after the game, cameras spotted Hart being denied access to the winners’ rostrum.

Despite the knock, Hart doubled down and caught the media’s interest again when he dropped an F-bomb live on the NFL Network. Clearly in high spirits after Philadelphia’s win, Hart tried to sum up his thoughts on the event but couldn’t hold his tongue.

Realizing his mistake, Hart made a sharp exit but not before video clips of his second faux pas caused a wave of merriment across the internet.

Despite the mini media storm, Hart took his L with a pinch of salt. As the events of the night before settled down, the comedian put up an Instagram video before tweeting the hashtag “iShouldHaveListenedToMyWife.”

No Publicity Is Bad Publicity?

For Hart, the Super Bowl slip-ups could add to his worldwide appeal which, in turn, might prove positive for PokerStars. Hart recently released a three-part video series for poker newbies on how to play poker.

Tackling some of the game’s fundamentals, the tutorials are designed to introduce Hart’s 100 million+ social media followers to poker. As you’d expect, each video has a comedy undertone, which is something the American believes is missing from the industry.

When he partnered with PokerStars in 2017, he made it one of his missions to make the game less serious and, therefore, more inviting for recreational players.

“I have bullied myself into a partnership with PokerStars. Why? Because I love the game. I’m deeply in love with the game. I’ve seen what the game is missing, and it’s missing me,” Hart tweeted back in April 2017.

If Hart’s recent performance at the Super Bowl is any indication of what’s to come, poker fans can look forward to some more laugh out loud moments in the future.

I loved his instagram post, I may not watch football but his instagram spoke to us all being just that tipsy at one time or another 😛

sure that wont slow him down, the guy is on top of the world