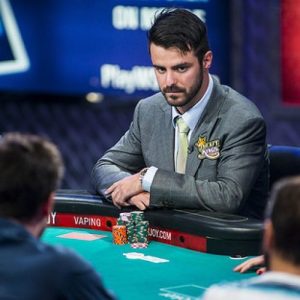 Max Steinberg, who won a WSOP seat playing on DraftKings might be about to provide a Moneymaker Moment for the DFS site. (Image: holdemformoney.com)

DraftKings has claimed this week that FanDuel, for so long the runaway leader in the Daily Fantasy Sports Market (DFS), is no longer number one.

DraftKings said that financial results from the third quarter will show that the company has now supplanted its rival and that it expects to record 25 percent more entry fee revenue than FanDuel.

Of course, we will have to wait for the figures before we can determine the truth in this, although as private companies, neither firm is obligated to publish financial results.

It’s clear, though, that DraftKings is pretty confident in its assertion, so much so that it is demanding that FanDuel remove its claim to be “the leader in Fantasy Sports” from all its marketing materials.

According to the Boston Globe, DraftKings founder Paul Liberman let this slip during an address at Babson College, Wellesley, MA this week.

“We’re going through a formal process of making them take ‘leader in fantasy sports’ out of all their marketing messages… We’re very, very competitive with them,” he said.

Liberman then claimed that he hadn’t meant to reveal this, but stressed that the negotiations with FanDuel were “amicable.”

If true, it will represent a meteoric rise to the top for the Boston company.

Founded just three years ago, it is, to all intents and purposes, still a start-up, albeit it one that several months ago was able to raise almost $300 million in funds to aid its planned international expansion.

Around $150 million of that came from Fox Sports, for an 11 percent stake in the company, and the added financial clout has helped DraftKings market itself aggressively as it engaged in an advertising war with FanDuel throughout 2015.

Steinberg on the Brink of a DFS Moneymaker Moment

According to iSpot, in the past week alone DraftKings has spent $15.9 million on TV ads, and FanDuel $14.6 million.

The DraftKings brand, meanwhile, was plastered all over the World Series of Poker this year, as the company sought to exploit the crossover between poker players and the DFS market.

November Niner Max Steinberg parlayed a $27 DraftKings deposit into a $10,000 WSOP Main Event seat, which is currently now worth a minimum $1,001,020.

Steinberg, who will wear a DraftKings patch at the final table, told PokerNews this week that DFS has supplanted poker as the main focus of his energies and he spends up to six hours a day tinkering with his draft picks.

So DFS might just be about to have its very own Moneymaker moment, which means DraftKings is standing on the brink of a dream marketing scenario.

If it hadn’t actually happened, it would probably be necessary for DraftKings marketing department to invent it.