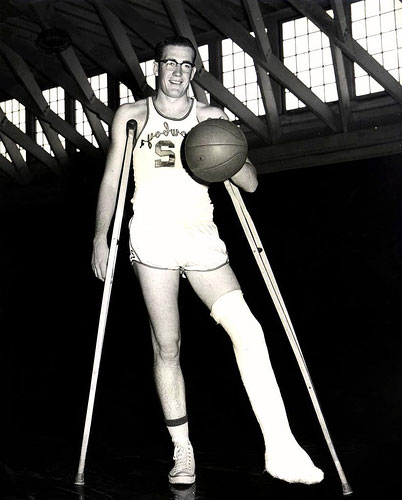 Doyle Brunson, seen here back in his basketball days at Hardin-Simmons University, will become a member of the Big Country Athletic Hall of Fame for his sporting achievements at college. (Image: beatthefish.com)

Doyle Brunson, possibly the world’s most iconic poker player, is soon to be a double hall of famer, but his latest accolade isn’t for his skills at the felt.

Long before Brunson was a bona fide poker legend, he used to out maneuver players on the basketball court. Part of Hardin-Simmons University’s starting line-up, as well as a member of the All-State Texas basketball team, Brunson showed enough promise as an amateur to earn the attention of the pros.

But a knee injury prevented him from capitalizing on the interest shown by the Minneapolis Lakers. And it was that missed opportunity in basketball that eventually led to his highly lucrative career in poker.

Despite Brunson failing to make the NBA, his skills as a college player and subsequent success as a poker pro have earned him a place in the 16th Annual Big Country Athletic Hall of Fame (BCAHOF). Announced on January 17, the 12-man list of inductees features the best of the best from the 19 counties surrounding Abilene, Texas.

“The thing about Doyle Brunson is he was an amazing athlete. He was a Border Conference player of the year in basketball. He was a mile state champion in track. He led Sweetwater to the state tournament in basketball. He probably could have got in on that alone, but he’s certainly a lot more famous doing what he’s doing now. Everybody knows the cowboy hat on the poker on ESPN,” said BCAHOF chairman Al Pickett.

Joining Brunson in the BCAHOF this year will be Steve Lineweaver, who won four state football titles as coach at Commerce and Euless Trinity and former Taylor County commissioner Jack Turner among others. The 12 inductees for 2017 will be officially honored at a special banquet on May 1 at the Abilene Convention Center. Due to his health, Brunson is not expected to attend, but has promised to submit a video acceptance speech.

As well as being a chance for members of the local community to recognize the achievements of Brunson et al, proceeds from the banquet will help support the college stars of the future. In total, money raised will go towards 12 $1,000 scholarships for graduating student-athletes from across the Big Country area.

Aside from winning 10 WSOP bracelets and more than $6 million in tournament prize money, Brunson has notched up some other notable achievements in his time, including: