No poker player wants to be stuck in a stacked lineup. Doug Polk is mad he ended up in a brutal lineup on a Friday Live at the Bike livestream against pros such as Dan Smith and Dan “Jungleman” Cates thanks to some players cancelling at the last minute. 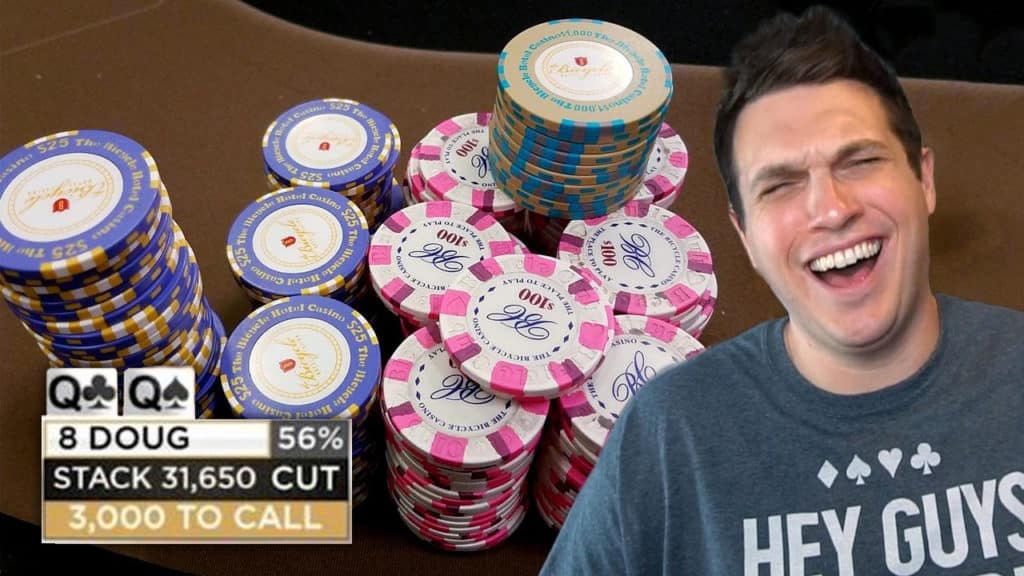 Doug Polk has grown frustrated after players who RSVP’d to play on “Live at the Bike” backed out at the last minute from appearing on a recorded episode. (Image: Upswing Poker)

Polk isn’t one to privately contact individuals he believes have sinned. Instead, he uses his social media presence, which includes 70,000 Twitter followers and 150,000 YouTube subscribers, to call out wrongdoers.

Friday’s “Live at the Bike” livestream was planned as a $100/$200/$400 no-limit hold’em cash game with a $500 big-blind ante. But the game never materialized after a few players scheduled to appear didn’t show. Polk wasn’t happy to find out the game he expected to play had been switched to a lower stakes PLO format.

Polk played anyway on Friday’s livestream against Smith, Cates, Upswing Poker trainer Ryan Fee, and online poker crusher Daniel “danmerrrrrr” Merrilees. But later, in a Facebook video from Bicycle Casino in Los Angeles, Polk shared his displeasure with anyone who backs out of a televised poker match.

“Multiple people who said they would play in this game today have canceled or not shown up or decided not to play or whatever,” he barked to his viewers.

“And I’m just starting to get a little concerned about this because if you look at what’s happening in a lot of poker shows, we’re seeing more and more that people say, ‘oh, we’re going to be there to play this game,’ and then the game comes and then they just don’t show up or they don’t want to play.”

Polk said he believes it’s rude to the other players to back out of a commitment and harmful to the show. He also said he understands that poker players want to seek out advantageous games against weak opponents. But he doesn’t think skipping out on a televised appearance because a player doesn’t like a tough lineup is an acceptable excuse.

“If you’re not going to play, just don’t put your f*cking name down,” he suggested, though some social media followers wondered if maybe Polk just needed a drink.

This isn’t the first time Polk ended up in an unfavorable lineup due to player cancellations. Something similar happened in a recent episode of “Poker After Dark.”

After Polk called out individual players who cancelled last-minute, some responded on Twitter.

Garrett Adelstein, a regular in the high stakes games on “Live at the Bike,” explained why he couldn’t make it, saying the game had already changed when he arrived.

Josh Macciello, an entrepreneur who admitted he hasn’t played poker in “months,” publicly apologized to Polk and the other players at the table for backing out. He claims a family event forced his change of plans.

But this tweet from earlier in the day didn’t age well.

Ryan Feldman, the show’s producer and commentator, was disappointed in Macciello’s decision to cancel at the last minute, and said he “scrambled” to convince the remaining players to play to “save the show.”

Macciello isn’t a regular poker player. He’s a successful businessman who occasionally joins a high stakes game. Adelstein is a loose-aggressive grinder who isn’t afraid to give action. These are the types of players pros such as Polk wants at the table.

So, when they don’t show and the only players left are top pros, Polk is understandably going to be upset, even though the viewers may be delighted.

There could be a very good reason for them cancelling, real life comes first. I think Doug should be more than confident in his own poker game that he should be able to hold his own against any players.