Donald Trump’s inauguration speech was delivered with a certain aplomb on the steps of the Capitol Building on Friday. Even outgoing President Barack Obama was seen mouthing, “Good job, good job,” as his successor left the lectern on a crescendo of “God Bless America” from across the massive gathered crowd. 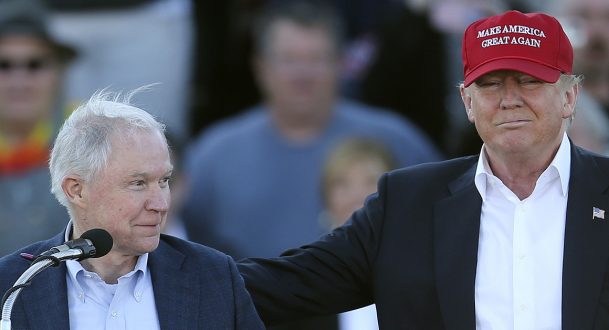 Newly annointed President Donald J. Trump with his US AG pick Jeff Sessions (seen here at a February 2016 rally). Sessions said he was shocked by the decision to permit regulated online gambling in the US, but all may not be as it seems. (Image: Politico.com)

The speech delivered impact, but there was little surprise in its contents. It was anti-establishment, nationalist, and populist, namely, all the things we’ve come to expect during Trump’s long campaign trail towards the White House.

Online Gambling “Has to Happen”

The absence of any confirmed reference to online poker came as little surprise, perhaps because Trump has never mentioned online poker in public, ever. But while the 45th president is undeclared when it comes to online poker, in the past, he’s expressed support of online gambling in general.

In a 2011 interview with Forbes, he declared, “[Online gambling] has to happen because many other countries are doing it and, like usual, the US is just missing out.”

There are a patchwork of conflicting clues when it comes to discerning Trump’s online poker position. On one hand, here is a former Atlantic City casino operator, who has owned poker rooms. On the other hand, his right-hand man, Vice President Mike Pence, was very much anti-gambling as governor of Indiana, and once claimed never to have bought so much as a lottery ticket.

Meanwhile, Trump’s pick for US Attorney General, Jeff Sessions, was recently quizzed about the 2011 DOJ opinion on the Wire Act by Sheldon Adelson crony and South Carolina Republican Senator Lindsey Graham and claimed to have been “shocked” by it. It would be something he would “revisit,” he said, and he would come to an opinion based on “careful study.”

For those late to the party, the DOJ opinion declared that the 1961 Wire Act prohibited only sports betting over the internet, and not online poker or casino games. This paved the way for the establishment of regulated online poker in New Jersey, Nevada, and Delaware, and Sheldon Adelson and his cronies have been railing against it ever since.

Sessions’ comments provoked concern in the gambling press. But does his response sound like more of a brush off to Graham? Translation: “Yes, Lindsey, it’s shocking, really, I know. I’m shocked. I’ll have a look at it at some point, when I get around to it. Soon. Leave me alone, please.”

Online Poker Ban Would Be Un-Trump-Like

Here’s another clue: the aforementioned Republican mega-donor Adelson took a while to get behind Trump and, when he did, he promised to donate $100 million. But he actually gave just $10 million, a pittance by his standards. Why? Did Trump lead him on and then refuse to toe the line on online gambling?

Pure speculation, we know. But Forbes’ Trump quote on online gambling, above, is telling, and it’s also very, very “Trump.” After all, the overriding theme of the inauguration speech was economic protectionism.

“We’ve made other countries rich while the wealth, strength, and confidence of our country has dissipated over the horizon. One by one, the factories have left our shores,” said Trump. “From this day forward, it’s going to be only America first!”

It was a recurring theme of the speech, and it represents much of what he campaigned, and won, on.

Trump hates the idea that people in other countries might be getting rich at America’s expense. Those not in the legal online states of New Jersey, Nevada, or Delaware are plowing their hard-earned dough into sites based in Curacao or Costa Rica. Trump hates that.

We can hear it now: “Let’s make online poker in America great again!”

Sheldon Adelson was seated right behind Trump on the main platform during his inauguration. Sad

Trump will disappoint many people that supported him .