DJ Mackinnon Comes Out of the Closet 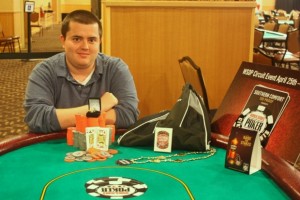 After coming out as gay, pro poker player DJ Mackinnon has gained respect on and off the felt. (Image: WSOP)

There are very few openly gay professional poker players. Vanessa Selbst never made her sexual orientation a secret, but Jason Somerville was the first to truly “come out” of the proverbial closet to the poker community. DJ Mackinnon did the same last week.

The goal of Mackinnon’s announcement was a personal release, a rite of passage to encourage honesty and openness among friends and fellow players. His message was not only well-received, but became another step toward showing that the poker world has the capacity to be a cohesive and supportive community.

Mackinnon took to his Twitter account to begin the announcement on April 14. “After much thought,” he wrote, “I decided being out of the closet is much better than being cooped inside of one.” He then linked to his Tumblr post entitled “Coming Out & Stopping the Insanity.”

The start of the post was jarring, as he recollected an incident in which a friend in the car with him said, “All fags should die.” He went on to talk about the years that he kept silent about his own sexual orientation and didn’t defend himself or the gay community when others were inappropriate. He held in the frustration and degradation from frequent “faggot” comments, internalized the experience, and stayed fearful of what his friends would think.

“I wish I didn’t care” about what others thought, Mackinnon wrote. “The truth is everyone wants to be liked, and I’m no different. It worried me tremendously about what people would think about my orientation.”

The post ended with the recollection of being honest with his friend in the car.

“He was fine with it, kind of suspected it actually,” Mackinnon noted.

Mackinnon’s tweet was retweeted 42 times as of April 18 and showed more than 200 favorites. The barrage of positive comments toward him prompted another tweet later that day: “Truly blown away by all the messages and support I’ve received today, from lifelong friends and strangers alike. It all really means a lot.”

Somerville, who came out via a blog post in February 2012, responded to Mackinnon with positivity. “I know that everlasting cloud of anxiety pretty well, hope you’re happier w/ it behind you!”

Many others in the poker community chimed in as well. Cliff “JohnnyBax” Josephy gave kudos to Mackinnon, along with the hope that it “goes much easier than you thought it would.” Daniel Lowery told him to “be proud 4 stepping up 4 being yourself,” and Cory Waaland mentioned that he already concluded Mackinnon was gay the previous year but “it never affected what I thought about ya. Nothing but respect homie.”

The responses also included some reflections from others who were prompted to think about derogatory remarks they had made in the past. One person tweeted, “I was one of those guys years ago, wish I wasn’t so careless with my words.”

In his years as a professional poker player, Mackinnon has garnered much respect at the live tournament tables as a skilled competitor. With several hundred thousand dollars in live earnings, his skills are backed up by results.

Mackinnon plays on the World Series of Poker Circuit and at the WSOP in Las Vegas in the summer. He has two major WSOP final tables to his credit, one a seventh place finish in a 2011 $1K NLHE event for more than $90K, and the other a fifth place in a 2013 $1K NLHE tournament for more than $77K.

The New York native tends to stay on the East Coast as much as possible, but still finds numerous opportunities to play. His big victory came in Philadelphia at the WSOP Circuit series at Harrah’s there, where he won a WSOPC gold ring in a $580 NLHE event for $14,850.

His most recent victory came online just days after his April 14 announcement. While in New Jersey for live poker, he played in the PartyPoker/Borgata $10K GTD Nightly tournament online and won it.

Sure he will feel alot better within him self once the dust settles, being true to your self is the only way to be truly happy with life.

Wouldn’t have happened a few years ago but people now are more accepting and recognise (if they are not bigoted) that a persons sexual orientation does not count. It’s the person’s behavior and their attitudes that count not their sexual preferences