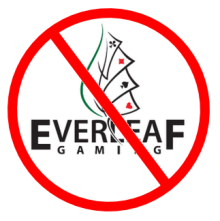 Malta says that Everleaf players will be paid, but the networks’ former customers are running out of patience. (Image: r akeback.com)

Everleaf Poker Network still has some ‘splainin’ to do; now that it seems that the majority of players who fell foul of the Full Tilt Black Friday fiasco are finally getting their money back, spare a thought for the forgotten victims of the Everleaf scandal. While the Everleaf Poker Network operated on a much smaller scale that Full Tilt Poker, and the sums involved less and the victims fewer, the infraction perpetrated on US customers is no less shameful.

But now, tired of empty promises, former customers of Everleaf are willing to stand up and be counted. Lead by “Sepholdem,” a poster on the Two Plus Two, they plan to take direct action with a sit-down protest at the stand of the Maltese Lotteries and Gaming Commission (LGC) at the International Gaming Exhibition (ICE) in London this February. LGC is the regulator that licensed Everleaf, and many feel it should have acted faster in investigating the company and revoking its license.

For those late to the party, Everleaf was a smallish poker network with low traffic and just over a hundred fairly obscure skins. Along with the flagship Everleaf Poker and Minted Poker, it included such sites as Pokerari, 777 Poker Club, and Blue Dog Poker. When the Department of Justice (DoJ) forced poker sites out of the US in 2011, Everleaf opted to continue accepting American customers, although it failed to gain the traction of some of its competitors in the illegal offshore market, post-Black Friday.

In the fall of 2011, the DoJ issued Everleaf with a cease-and-desist notice and intercepted some of its funds; around $27,000 of bank wire transfers that happened to be in transit at the time. While alarm bells should have been ringing, Everleaf continued to take customer deposits via wire transfer for another four months before suddenly closing its American operations and banning all US customers.

While Everleaf officials initially hinted at a US-approved remissions process, no such scheme was forthcoming; instead, Everleaf offered American players a proposition that was essentially a Catch-22. Players could retrieve their funds in three ways, explained the company: by opening a non-US Neteller account, a non-US Moneybookers account, or a non-US bank account. Since all these things required a trip abroad, and considering the funds in the majority of players’ accounts were relatively small, Everleaf must have known that few players would attempt to reclaim their funds. Two and a half years later, Everleaf, and the money it owes to players, appears to have disappeared.

Meanwhile, anger has shifted to the LGC, which has a duty to see that its licensees abide by strict regulatory procedures, particularly when it comes to handling its customers’ funds. And yet, while Everleaf stopped processing US withdrawals in February 2012, the regulator failed to revoke its license until July of that year.

However, it does seem that Malta is prepared to accept the responsibility for regulatory failings with Everleaf; the scandal has received coverage in local media and even prompted a government enquiry. The new head of LGC, Joseph Cuschieri, recently said that international arrest warrants have been issued for the owners of Everleaf, and promised that the players will receive their funds. However, over two years after the network stopped processing US withdrawals, it seems that players are getting tired of waiting.

It seems LGA is barking up the wrong tree. Jean Pavili is the owner and the only person that had access to the company funds. In early 2013 he fired Michael Zwi Oros who had been the gaming director for only a few months and new none of the problems. Even if he did he could not do anything about it, Jean Pavili is his cousin and hired Oros while he knew nothing of gaming. Oros went to the LGA to renounce his job but the LGA said that Pavili had to renounce Oros’s position. Thus started some of this mess. Oros, completely innocent, is now arrested by Malta for being the gaming director of Everleaf!!! Seems that Jean Pavili is getting away with a lot of funds, approx. 800,000 euro while Oros is awaiting trial. I understand that the LGA wants to get the players’ money back, but Oros never had anything to do with Everleaf’s mess. The LGA is looking for a quick way out of this blaming Oros for Everleaf’s (Jean Pavili’s) criminal activities. If you want your money back talk to the LGA and have them find Jean Pavili, who has disappeared.