Canterbury Park in Shakopee, Minnesota, hosted earlier this month its annual Fall Poker Classic, which has become one of the Midwest’s premiere tournament series dating back to 2001. The capstone $1,100 Main Event drew 375 entries, and in the end Dennis Stevermer came out on top to win $72,762 after a heads-up deal with Todd Melander. 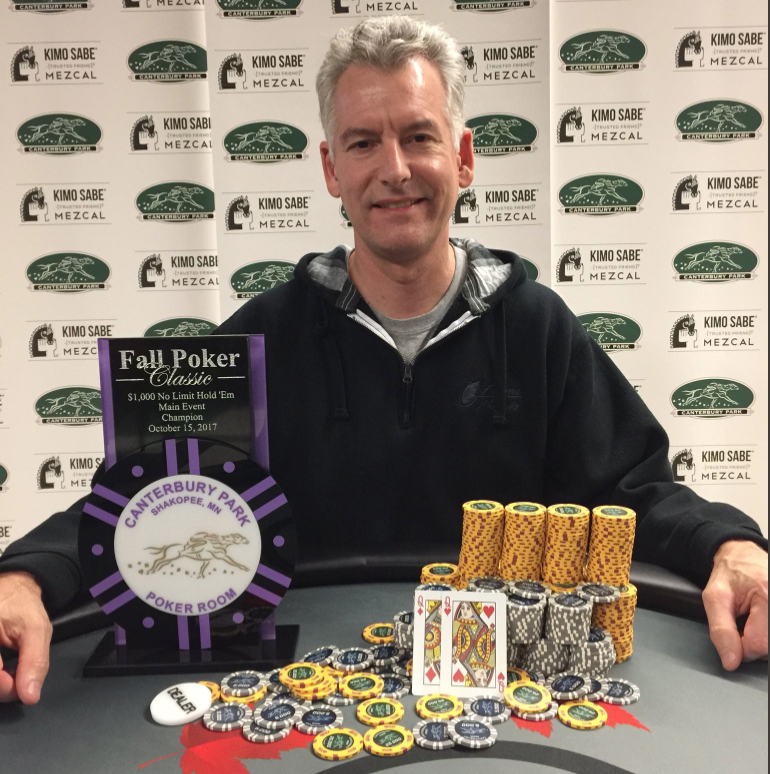 One Time: Dennis Stevermer’s wife allows him to play only one tournament a month, and he made it count by taking down the main event at the 2017 Fall Poker Classic. (Image: Canterbury Park)

Along with his wife Janet, and his high-school age son and daughter, Dennis Stevermer lives in Highland Park in St. Paul and has worked at Flame Metals Processing for 24 years, including a decade as its owner.

Growing up, Stevermer said he played a lot of card games with his family, but it wasn’t until 2006 that he discovered no-limit hold’em on PokerStars.

“Once I started playing online, I was hooked,” he said. “In 2011, on Black Friday, my online poker hobby came to an end and I gradually transitioned to live poker tournaments.”

However, given his kids were just 9 and 11 at the time, he and his wife agreed that he would play just one tournament a month so as not to interfere with family and business.

“Since I was only playing once a month and had played on online for a few years, I looked for tournaments that had a buy in of about $1,000,” he explained. “As I became more successful, I expanded to include bigger buy in tournaments, but stayed at one per month.”

One of those tournaments was the World Poker Tour Bay 101 Shooting Star Main Event, earlier this year.

Stevermer managed to navigate a field of 806 entries to make the televised final table alongside the likes of Rainer Kempe, Paul Volpe, Chino Rheem, Anthony Spinella, and Sam Panzica.

“On Day 1, I knocked out Maria Ho for a $2,500 bounty and the next day I knocked out Pat Lyons for another bounty,” he said of the experience. “The tournament was a marathon. I was by far the shortest stack at the final table. I had 12 big blinds while everyone else had at least 30 big blinds.”

Fortunately, an early double allowed Stevermer to outlast Kempe, who busted first. Stevermer then exited in fifth place for a career-high $243,090.

“Being at a WPT televised final table was absolutely amazing,” he said. “I got a tremendous amount of support and encouragement from my friends and fellow poker players in Minnesota.”

“The FPC is the one time of year that I play multiple events,” said Dennis Stevermer. “The FPC is special for Minnesota players, with everyone wanting the trophy and no serious talk of chopping.”

Stevermer made Day 2 of the Main Event 40th in chips out of 54 returning players. He hung in their though, and with around 20 players left he doubled with sixes against Big Slick. He then knocked out four players in about 20 minutes to take his stack from 200,000 chips to the chip lead with over 1.2 million.

“Todd is definitely a good player, and even though I had a substantial chip lead, I viewed a chop as a way to lock up the title and take away the potential variance,” Stevermer said of his decision to strike a deal. “I made Todd an offer he couldn’t refuse.”

Even with the win, Stevermer is sticking to the plan of playing one tournament a month, though he did say he might seek out a bit bigger buy-in such as December’s WPT Five Diamond Classic at the Bellagio in December.

Nice write up Chad. Enjoyed playing with Dennis & found him to be centered, fearless & friendly. Was excited to see he won this.