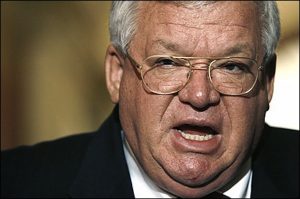 Former Speaker of the House of Representatives Dennis Hastert will not be prosecuted for child abuse due to statute of limitations. Prosecutors accuse him of living a life of “staggering hypocrisy.” (Image: thetrustadviser.com)

Dennis Hastert, the disgraced former Speaker of the House and one of the main forces behind the banning of online poker in the US in 2006, now stands accused by prosecutors of molesting at least four underage boys in his care several decades ago.

Hastert was initially indicted in May 2015 on charges of fraud, for structuring the withdrawal of $1.7 million in cash from various bank accounts over several years in order to avoid bank reporting requirements. He was also charged with lying about it to the FBI.

The indictment revealed only that the funds were to “compensate for and conceal [Hastert’s] prior misconduct,” the nature of which remained unspecified, other than the hush money was paid to an “Individual A” and the misconduct related to the time Hastert spent as a teacher and wrestling coach at Yorkville High School in the suburbs of Chicago.

Media digging soon uncovered several people who knew Individual A who said they were aware of the sexual abuse allegation against Hastert, and in the ensuing months more victims came forward.

Court documents filed on Friday marked the first time that prosecutors have confirmed that Hastert had paid to cover up abuse. Prosecutors stated their belief that he had molested at least four boys at Yorkville, where he worked from the late sixties to the early eighties.

Hastert will not be prosecuted for child abuse, but on fraud charges alone due to the statute of limitations, although the prosecutors’ filing noted that former Speaker had led a life “marred by stunning hypocrisy.”

As a politician, and eventually the third most powerful one in America, Hastert was a staunch conservative who opposed several gay rights bills in the name of family values.

He famously led the impeachment of Bill Clinton for lying under oath about his affair with Monica Lewinsky under the premise that “no one is above the law.”

In 2006, he spearheaded the American Values Agenda, a loose collection of Republican legislative initiatives that included the Unlawful Internet Gambling Enforcement Act, which sought “to protect the faith of our people, the sanctity of life and freedoms outlined by our founding fathers.”

Despite throwing his weight behind anti-gambling legislation, he accepted several million dollars in campaign donations from the gambling industry throughout his career, although he opposed the casino expansion ambitions of certain tribal gaming operators in Illinois because, unlike others, they had failed to cough up for the cause.

Prosecutors recommend he should face up to six months in prison.