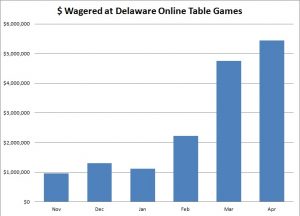 While online poker might have more mainstream support across the nation – as poker has proven time and again to be a game of skill – online revenues dipped in Delaware 12.2% in April, according to a report released by the state. The good news for “The First State” is that single month revenues hit an all-time high, thanks to the growing popularity of table games. Overall, Delaware saw a little more than $240,000 in total revenues in April, 2014.

Delaware is one of the three states in the USA that has passed laws to allow online gaming and online poker, which launched back in November, 2013. There are three drivers of revenue when it comes to online gaming in the state – table games, video lottery, and poker rake and fees.

Table games are the standard casino games like blackjack and roulette, in an online electronic form. In the month that Delaware launched the games, they were able to make a little more than $24,000 in revenues. Poker, back then, was the biggest revenue driver, bringing in almost $68,000 and for the whole month, the state brought in $111,387. Since then, the trend for table games has been very steady, seeing growth starting from January and growing ever since. In fact, table game revenues month-to-month in 2014 went from $24,405 to $64,986 in February, to $94,965 in March, and then jumped to $137,203 in April.

Unfortunately for poker players, it appears that the revenues are not seeing any growth, and if anything, are seeing a decline. While revenues in January 2014 for poker amounted to $88,390 they dipped to $73,971 in February. Delaware saw some growth in March, hitting $84,391, but then in April dipped back down to just $74,078, suggesting that the amount of online revenues might be normalizing into a predictable pattern.

Another indicator of success for online poker in the state is the number of registrations seen, which has done nothing but decline since the state introduced games. Back in November 2013, a solid amount of players amounting to 2,654 registered to play. Since then, it’s been all downhill. Since then the number of player registrations has gone to 1,336 (December, 2013) to 1,006 (January, 2014, to 693 (February) to 640 (March). In April, the number continued to spiral downward to just 406 player registrations.

While poker players might not be happy about the trend for online revenues and player registrations, the state of Delaware has to be thrilled about the revenues. Since the state initiated the online table games, video lottery, and poker, it has brought in a little over one million dollars. Even better news for those that want to see the “Delaware iGaming” initiative succeed is that the revenues have continued to grow in 2014.

Don’t think that it’s just Delaware searching for answers with online poker. Nevada saw 15% less revenues in April compared to March, and New Jersey dipped by a few percentage points as well, suggesting that the month is actually a lull for the entire industry, not just one state.