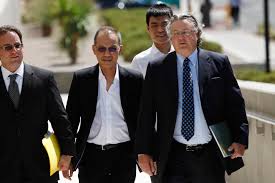 Paul Phua is asking a judge to dismiss the charges against him. (Image: AP)

Paul Phua may be just one more ruling away from winning his freedom.

Defense lawyers for Phua have made a request to the judge presiding over his case that the charges against him be tossed, a move that comes in response to a previous ruling that tossed much of the evidence that was to be used against the Malaysian businessman at trial.

Phua is accused of operating an illegal sports betting ring out of a Caesars Palace villa in Las Vegas during last year’s World Cup.

It’s unclear what the chances are of attorneys David Chesnoff and Thomas Goldstein being successful in their attempt to end the case.

However, even if they can’t get the judge to end the proceedings entirely, they also have other requests that they hope the judge might grant.

In a request to US District Judge Andrew Gordon, the lawyers asked that the government be required to specify what evidence they plan to use against Phua if the case does go to trial.

Since most of the evidence they planned to use was deemed unusable by Judge Gordon because of the tactics used to obtain it, the defense team seems to be unclear on what will be used against Phua in court, something they say they have a right to know.

“We are asking the government to provide us with facts so we can fairly defend ourselves,” said Goldstein and Chesnoff.

The lawyers also made another request designed to ease the conditions Phua is living under while he awaits trial. They asked that the GPS monitoring of Phua be ended, and that he be allowed to travel abroad, something they say would be perfectly safe.

“He is not a flight risk and has had the courage to remain and fight for his liberty,” they said in an email.

In recent weeks, the case against Phua seems to have been breaking in favor of the defendant. Judge Gordon found that an initial search conducted by FBI agents was unconstitutional.

The agents had worked with Caesars Palace and gambling regulators to turn off the Internet access to the villa Phua was staying in, then posing as repair technicians when Phua and his associates called for assistance. The evidence obtained in that search was then used to obtain a search warrant for a later raid.

However, Judge Gordon found on April 17 that the evidence from those searches could not be used in court.

“Permitting the government to create the need for the occupant to invite a third party into his or her home would effectively allow the government to conduct warrantless searches of the vast majority of residences and hotel rooms in America,” Judge Gordon said.

Without that evidence, prosecutors have previously said they would have a difficult time making their case against Phua. However, US Attorney Daniel Bogden has said that the government won’t be commenting on the case publically as the case is still ongoing.

Phua is the last remaining defendant of eight who were initially charged in the case, and is currently scheduled to begin his trial in June.

Six other defendants, including Phua’s son Darren, pleaded guilty to lesser charges and will be banned from traveling to the United States for five years along with having to forfeit cash as a part of their plea deals. One other defendant had the charges against him dismissed.

There aren’t many organizations that are as skilled at dishonesty and deception as the Federal government. You have to ask yourself which party to this case is the most criminal minded, the defendant who is charged with victimless crimes, or the government that practices fraud and deception to achieve its ends.