A new online site promising to bring a live poker room experience to your computer is to debut in the coming weeks. Dealio Webcam Poker promises to “revolutionize online poker” by putting the players in as “live” a poker environment as possible by using live dealers (the “Dealios”) to conduct the table action in a manner similar to live play. 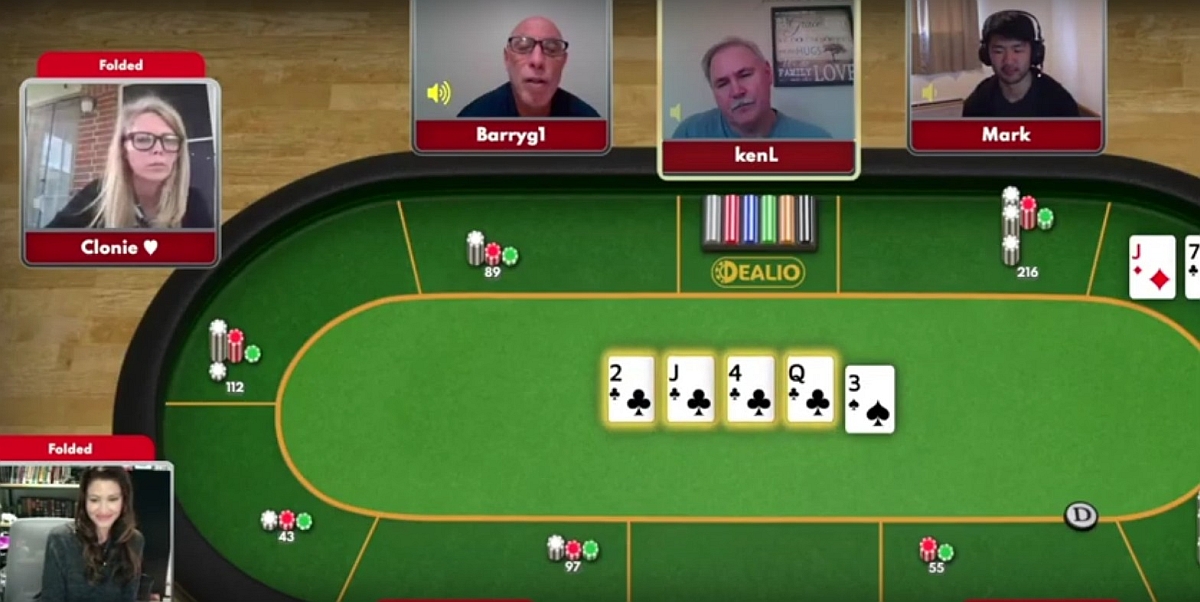 Online poker has always been both like and unlike its live counterpart, being a prime example of what the late science fiction writer Robert Heinlein popularized as having verisimilitude, meaning the appearance of being true or real. Online poker excels at capturing the mechanics of the game, and it provides action at a pace live poker can never match.

But, when it comes to emulating the true feel of live poker and the psychology of the game — of reading your opponents in the moment? Not so much.

That’s where Dealio comes in by promising to make online poker feel far more real. According to Poker Hall of Famer Barry Greenstein, who’s part of the Dealio project, “Poker is as much a psychological game as it is a mathematical one. You need to be able to see how your opponent reacts to your bet to know what they are thinking about.”

Greenstein, who tipped news about Dealio’s pending launch on Twitter in late April, serves as a senior software and poker advisor to the site. Greenstein, who was once a software engineer at then-startup Symantec in the 1980s before pursuing a poker career, also served as a longtime advisor and ambassador for industry giant PokerStars.

How Dealio plans to make the online poker experience more like live play focuses on the role of the Dealios, aka, the dealers. The Dealio monitors all action at the tables and has access to in-game controls that allow for game moderation and rules enforcement. This allows for players to verbalize their betting actions and for the table’s Dealio to rule on whether actions are binding or not. Dealios are also empowered to enforce penalties for rules transgressions and to bar “inappropriate table talk.”

“Live dealers keep the game fun and fair, just like at a real table in a poker room, making calls where needed, enforcing the rules, and keeping the action moving,” said Clonie Gowen, a member of the Dealio software development team. Gowen, an original member of the original Team Full Tilt in the mid-2000s, also brings a strong software development background to the project.

In relegating control and the flow of the game to the live dealers, Dealio positions itself much like the “live dealer” versions of casino table games (blackjack, baccarat, etc.) available on numerous online casino sites. Using the same approach with poker’s more complex mechanics is one of the hurdles Dealio must overcome, though it’s far from the only one.

As one might expect, one of the requirements of Dealio’s game-play will be for players to remain in front of their web cameras and viewable to other players whenever they’re in a hand. Eradicating the possible use of poker bots and real-time strategy aids are also high on Dealio’s must-accomplish list.

Dealio is also following the lead of several of online poker’s newer sites by relying on the blockchain and cryptocurrency for players to move bankrolls on and off the tables. This will keep the funds out of the hands of the site, which withdraws only earned rake for its services.

To date, Dealio hasn’t specified which cryptocurrencies will be used for deposits and withdrawals, though one early release references an on-site, proprietary HOLDEM token, which may be utilized for in-game play.

Dealio and its parent entity, Dialectic Applications, Inc., were founded by Dallas-based intellectual property attorney Donald Puckett, who describes himself as an enthusiastic recreational player. The COVID-19 pandemic forced Puckett online and into using some of the webcam-based online sites already available. After playing on those sites, however, Puckett found they lacked that something special about the live game.

He soon assembled a development team and augmented that with the signing of several well-known ambassadors. Besides Greenstein and Gowen, tournament directors Ken Lambert, Jr. and Justin Hammer are on board. Additional player-ambassadors include Nathan Gamble, Jacob Zalewski, and poker player/actress Shannon Elizabeth.

The problems with most sites were apparent to those involved. As a Dealio presser proclaims, “One of Dealio’s primary goals is to provide online poker that players can trust in an era where online poker is often plagued with AI-bots and real-time assistance tools that cause players to question who they are really playing against.”

Greenstein added to that, stating, “You don’t vouch for a person’s integrity unless you feel you know them. Online, how do you know if this game is fair? Avatars cause distrust. Face to face is more important than people realize.”

Webcam poker has struggled to establish wide market base

Despite many players’ desire to embrace an app that might capture the feel of the live game, it’s been a long struggle to date, with more failures than successes. Attempts to market a webcam-poker product date back to at least 2006, when two sites, Pharaoh’s Poker Palace and JacksNQueens.com, each gave it a whirl. Both sites disappeared quickly. In 2010 another startup, FacePokerLive, tried a similar approach and also found no success.

Later that same year, 888Poker rolled out its PokerCam tables, which remain available today. Those tables remain something of a novelty amid years of user reports that most players just cover up their computer cameras anyway; many sites view camera use as an option rather than an in-game requirement. Other sites have followed 888Poker’s lead, or have tried different camera-based approaches, yet none can truly be called a commercial success.

Dealio would like to change that. The site promises to launch its platform later this month with a charity event featuring its ambassador team. As for a live, real-money debut, the site has yet to offer specifics, though at the start, according to Greenstein, it’ll be, “Play money everywhere.” Greenstein added, “Only licensed for real money in Texas. Nothing grey (market). Hopefully, we’ll eventually be able to get into other legal markets in the US and eventually elsewhere.”