Dealer Errors at WSOP Are Few and Far Between But Can Be Devastating for Players
June 7, 2022 WSOP News

WSOP Dealer Errors are Few and Far Between, but Can Be Devastating for Players

To err is human, and although it might surprise some of the crustiest, more miserable players in the poker world, dealers are indeed members of the human race. And that means mistakes are sure to happen. 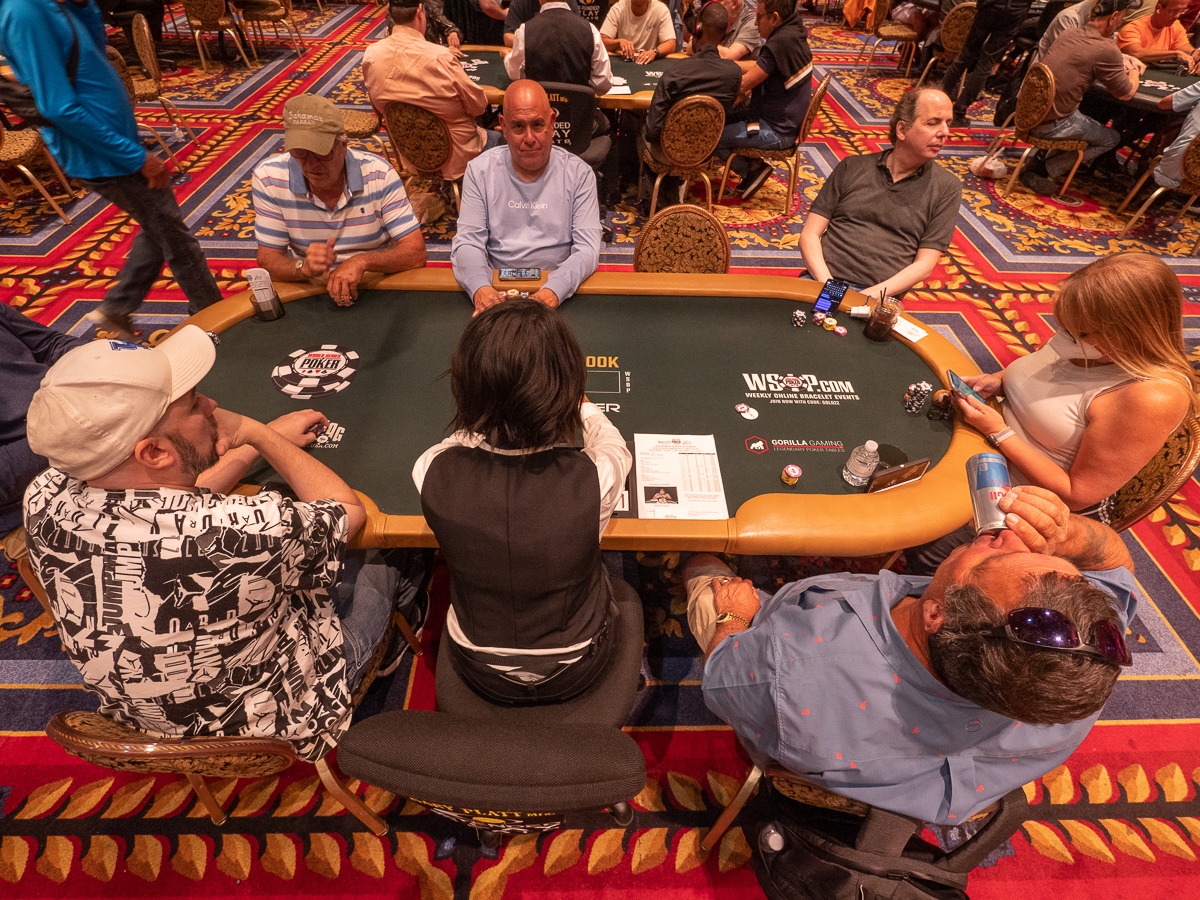 Poker wasn’t even invented when Alexander Pope came up with that phrase in 1711, but it should be pasted somewhere in Paris and Bally’s as a reminder to not be too hard on the dealers who pitch thousands and thousands of hands under the hot lights and cold stares that come with working the World Series of Poker.

And let’s just say it; WSOP dealers and their supervisors do a fantastic job every year.

Still, some mistakes are simply head-scratchers, like the one a dealer made during the first day of the $500 Housewarming last week.

When told to color up the chips, instead of turning the smaller denominations into big ones, the dealer pulled all the stacks into the middle of the table and racked them.

It delayed the tournament for more than an hour while management was forced to go to the eye-in-the-sky to get the stacks right.

It was a frustrating start for those affected, but at least some players were able to laugh it off.

Can all my friends check-in and and let me know you're OK after "The Great Color Up Catastrophe of 2022?" #WSOP #markedsafefromcolorupdisaster

News of the color-up error prompted Mike Callan to make this post in the Poker Dealers Facebook group. 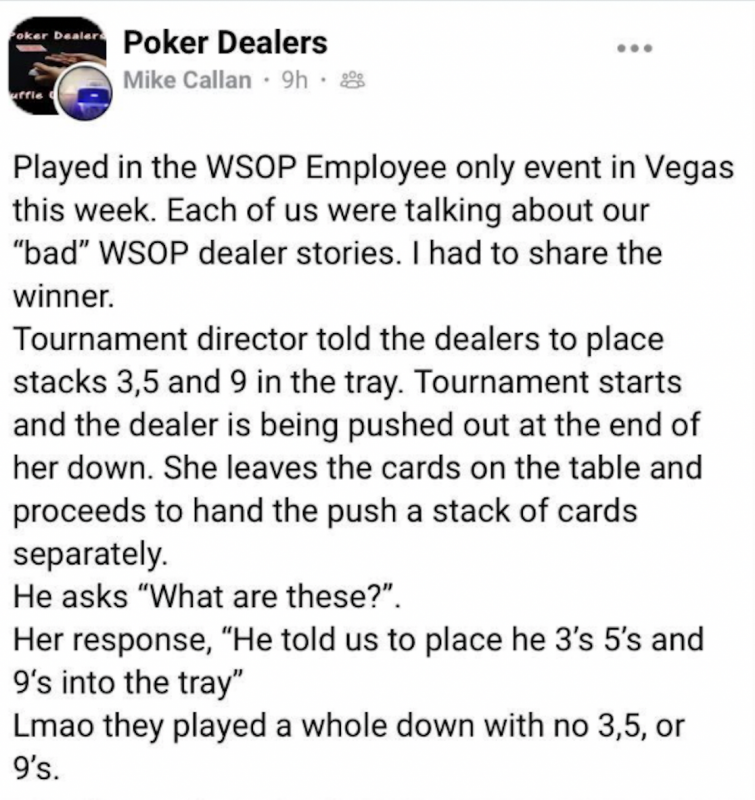 Ah, who needs the threes, fives, and nines anyway?

But the anguish from being on the wrong side of a dealer’s error is very real, and during live competition, can be devastatingly frustrating. A mistake also has the power to alter the whole equilibrium and outcome of a tournament.

Here are some examples.

In 2009, French journalist Estelle Denis was sitting in seat nine, directly to the right of the dealer, with 142K in chips on Day 5 of the WSOP Main Event.

She looked down to find pocket aces when J.C. Tran raised the action to 32K. Denis quickly declared “all-in” and pushed her stack toward the middle of the table.

The dealer reached behind Denis’ stack and threw her two cards into the muck as casually as taking a sip of water. Denis couldn’t believe her eyes, jumping up and whispering her hand into the dealer’s ear in a semi-panic. The dealer immediately blamed her for not protecting her hand.

Of course, the floor is called as the dealer sat stone-still waiting for the ruling.

“The dealer made mistake, but it’s the player’s responsibility to protect their hand,” said Norman Chad on the broadcast. “It’s unfortunate. It’s ugly for Estelle Denis, but it’s by the book.”

After a feeble attempt at retrieving her hand from the muck, the supervisor made the ruling: Denis’ hand is dead.

Not only that, but the 32K raise she called stayed in the pot. Instead of nearly touching 200K — or possibly doubling up to more than 300K — Denis was left with about 110K and a head full of despair.

“It’s a joke,” she said as play continued, her French accent dripping with derision. “I had two aces!”

Denis took a lap or two around the Amazon room to cool down after the incident before eventually finishing the event in 203rd place. Tran made it to 108.

Another quick scoop-and-muck by a dealer changed the trajectory of a $1,000 WSOP No-Limit Hold’em event in 2013.

Jason Koon raised from 21K in the cut-off before Angel Pagan moved his stack of 174K into the middle. The dealer then grabbed Pagan’s cards and threw them in the muck.

As in Denis’ case, the floor was called and eventually ruled against Pagan, whose hand was declared dead, and whose 21K had to stay in the pot.

The hand proceeded with Matt Waxman calling the raise from the big blind. After a check and call of 30K on the flop, the final two rounds went check-check before Koon took the hand down with a pair of fours.

Pagan said he had queens and Waxman told the table he was going to move all-in behind him before the dealer changed history and mucked the ladies.

Waxman said he would have been eliminated had pushed all of his chips into the middle. Instead, he went on to win his only bracelet.

Math in a pressure cooker

With 11 players left in the 2019 WSOP Main Event, Dario Sammartino was the victim of a miscalculation that sent him to the mental sauna.

Thoughts on the Main Event miscount everyone is talking about? 🗣️😰⬇️#WSOP50 pic.twitter.com/I5h9Yz6z67

Playing behind a stack of 62.2 million, Sammartino faced an all-in from Nick Marchington. Holding pocket 10s, he asked for a count. The dealer announced that Marchington has 17.2 million — five million less than the 22.2 million he really had.

Sammartino quickly called, thinking it was only costing him 21.5 big blinds. Then, the mistake is revealed, giving Sammartino the opportunity take part in every poker player’s second-favorite hobby: complaining.

The floor was called and ruled against Sammartino, telling him his verbal call must stand. When his 10s failed to improve against his opponent’s pocket queens, Sammartino went hunting for some sympathy.

While the ruling was correct because it’s always up to the players to protect their hands, and verbal declarations always count, even if the player is given bad information by the dealer. While the ruling stung, it was a wisecrack from the tournament director Jack Effel that really sent Sammartino spiraling.

“You’re calling 17, you’re calling 22,” barked Effel while walking away and cutting off Sammartino’s objections before the flop.

Sammartino couldn’t believe his ears and took a few hands to steam down. In the end, it hardly mattered, however, as he second for $6 million.

Intentionally flippant or not, Effel’s comment didn’t sit right with either the players going for the $10 million top prize or for those watching the action.

Insane that it took three floor persons, and a call to Jack Effel, to make a simple ruling that the call stands. Jack did everything right, until his uneccessary commentary of whether Dario would call the extra 5m. #WSOPMainEvent

One of the most embarrassing moments I believe in poker history. The World Series of Poker and its leader, Jack Effel should apologize to Dario for such a demeaning and incorrect statement. The WORLD is watching and you made poker look like a joke on the biggest stage possible. https://t.co/SWrZmeNtPq

The moral of the story: protect your cards

Players, dealers, and tournament directors use the rules created by the Tournament Directors Association, which puts a heavy onus on players protecting themselves during any given hand. That includes keeping track of bet sizes, stacks, action, making change, and yes — protecting cards from a dealer who may have temporarily lost their senses.

Even so, that doesn’t change the fact that a dealer mistake can make even the most mild-mannered player spout steam from their ears like a cartoon teakettle, especially at the WSOP.

Like Lon McEachern said during the Denis disaster, the occasional accidental scoop-and-muck is “a very good argument for card protectors.”

May I suggest the Bryn Kenney-inspired one available on Amazon?

Did a dealer’s mistakes cost you money? Tell us about it in the comments.