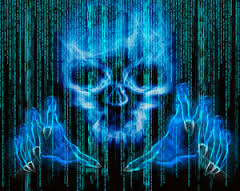 Online gambling is now by far the sector most targeted by DDoS attackers. Online poker sites are vulnerable because they can be attacked during peak hours. (Image: pcworld.com)

Distributed denial of service (DDoS) attacks rose by 180 percent in the third quarter of 2015 when measured against the previous year, according to a new report from tech security company Akamai.

And the online gambling sector is now by far the biggest target, accounting for some 50 percent of all attacks.

The findings in the “State of the Internet” report certainly chime with increasing reports of confirmed and suspected cyberattacks on online poker sites this year.

DDoS attackers overload a website’s bandwidth with hundreds or even thousands of simultaneous requests, rendering it temporarily nonoperational.

The site is usually held to ransom, with normal services restored only upon payment, or if the security team are able to fend off the threat.

Such attacks are almost as old as the online gambling industry itself, but, as this report illustrates, they are escalating.

Online sports books and poker rooms are, perhaps, preferred targets because attackers can strike at peak times, such as during the soccer World Cup, before a big horseracing festival, or during a poker site’s flagship tournaments series, for example.

According to Akamai, the online gambling sector has been the most frequently-targeted sector for over a year, ahead of its own sector, software and technology, which receives 25 percent of all reported attacks.

Attacks are being fueled by the easy availability of DDoS-for-hire sites that identify and abuse exposed Internet services, the company said.

Some DDoS-for-hire sites offer their services for as little as $38 per hour, while the attacks themselves can cause tens of thousands of dollars-worth of damage per hour.

“Akamai has been seeing greater numbers of denial of service attacks every quarter, and the upward trend continued in the most recent quarter. Although recent DDoS attacks were on average smaller and shorter, they still posed a significant cloud security risk,” said John Summers, vice president of Akamai.

There have been numerous reports of suspected attacks in the US-facing offshore online poker market this year, which is perhaps seen as a soft target because it has little protection from law enforcement.

No Site is Safe

However, no market, or site, is immune; in July the recently-regulated New Jersey market reported its first spate of attacks.

David Rebuck said that “at least four” sites were knocked offline for around half an hour by a cyber attacker who demanded a ransom, to be paid in bitcoin or else he would unleash a more serious attack.

Chances of attackers being caught by law enforcement are slim. To date, there have only ever been two criminal prosecutions of online gambling DDoS attackers, both in the UK.

The most recent occurred just last month, the defendant a teenager who lived with his mother and wept in the dock. He was given a suspended sentence by a judge who exhorted him to “get out more.”

I was playing gta v online for maybe a half hour before someone hacked it and ddosd me out the game. its crazy. Although I lost the connection a couple times playing poker, its a good thing it didn’t become a problem yet.