Day 1A: 2018 WSOP Main Event Gets Rolling with Eyes on Former Champs, Celebs to See Who Bounces Early

As if anyone expected it to happen, there will be no repeat WSOP Main Event winner this year. 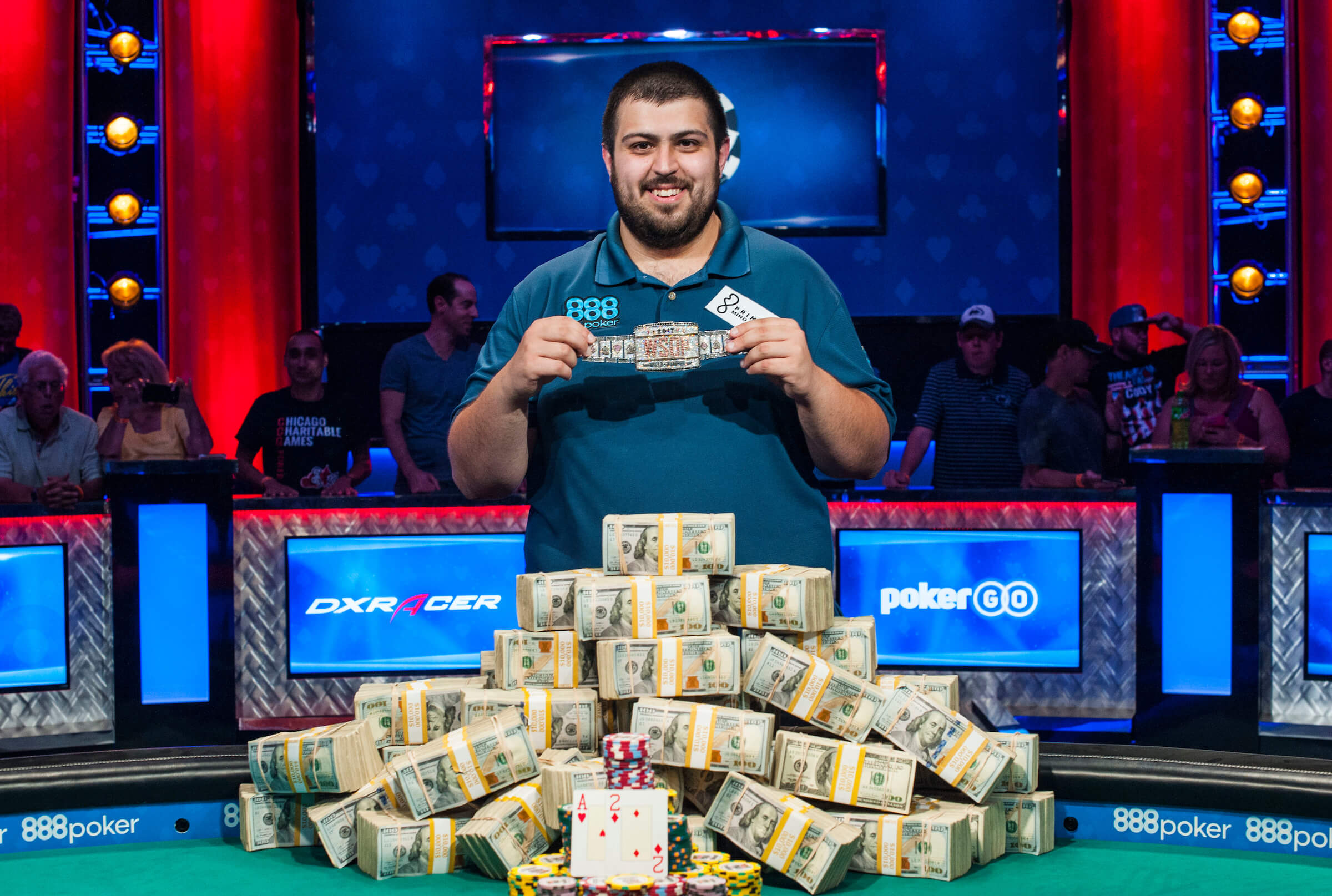 Defending champion Scott Blumstein made a quick exit on Day 1A of the 2018 WSOP Main Event. (Image: WSOP)

The reigning world champion, Scott Blumstein, was one of 264 Day 1A bustouts at the 2018 World Series of Poker.

Monday was the first of three Day 1 sessions, and it started with 925 entries — the most since 2013 (943), and 130 more than last year, although that may have something to do with players opting to be free on the 4th of July, Day 1C. Perhaps, they’d rather watch Joey Chestnut stuff his face with as many hot dogs in 10 minutes as the average American consumes in a year (true stat). Everyone has their priorities.

But after the first day, or more precisely the first version of Day 1, there are plenty of former Main Event champions, and celebrities still alive.

Joe Hachem, Scotty Nguyen, Ray Romano, and Kevin Pollak were among those who bagged chips on Monday, while three former champs – Jerry Yang (2007), Qui Nguyen (2016), and Blumstein (2017) — weren’t so fortunate. 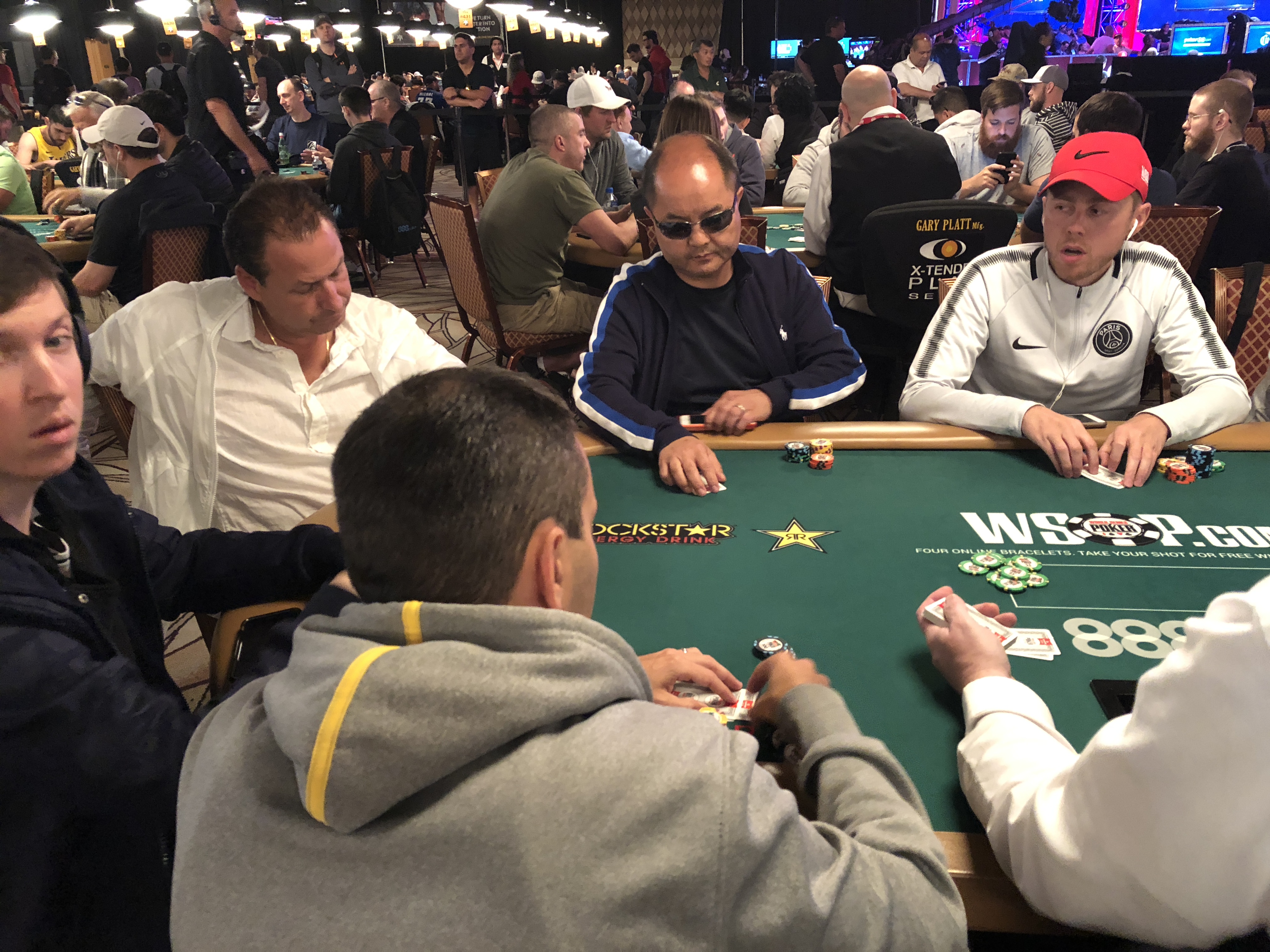 After the five-level session concluded, Truyen Nguyen bagged up the biggest stack (324,800).

Pressure Gets to Defending Champ

Blumstein’s inability to find a fold on the river with an over-pair (10’s) on a paired board that had three spades for his remaining 27,350 chips against Brian Yoon sent the defending champion home in less than four hours after his opponent showed the ace-high flush.

The questionable call was harshly criticized by one sports radio host who doesn’t appear to have much of a following – 568 Twitter followers. Blumstein, being the class act he’s shown throughout the past year as the reigning world champion, instead of firing back an insult, took the high road and admitted he made a bad play.

What it shows is how strong mentally you have to be to play this game at the highest level… I knew the right answer but I let the moment get the best of me. I actually felt more pressure today then I did at the final table last year. Poker is just a game. Life goes on. https://t.co/mDhcIt1e70

Blumstein’s call was far from the most questionable play of the day at the Rio. That dubious distinction goes to an unknown player who is probably glad he or she remained anonymous after punting off his or her entire 50,000-chip stack to Victor Ramdin on the very first hand of the day.

The unknown player raised to 400 in early position and then called a three-bet to 1,500 from Ramdin, who was on the button. After the flop ran out 10♦4♥3♠, the anonymous player made the questionable decision to lead out into the pre-flop aggressor for 4,000 with complete air.

Holding an over pair on a dry board, Ramdin made the easy call. The K♥ on the turn gave Victor the nuts but his opponent, who continued his over-bet aggression with a 13,000-chip bet, had picked up an open-ended straight draw.

Ramdin then fired back a min-raise to 26,000 which induced an all-in shove followed by a snap call. The river Q♦ sent one hyper-aggressive player home a few minutes after “shuffle up and deal” was announced by Blumstein. There are probably better ways to spend $10,000.

Former NFL star Richard Seymour, three former Main Event champions, two-time Main Event final table participant Ben Lamb, and high stakes crusher Stephen Chidwick were all felted on Monday. But many poker and Hollywood stars will be coming back on Wednesday for Day Two including actors Ray Romano and Kevin Pollak, both making their annual appearances at the WSOP. 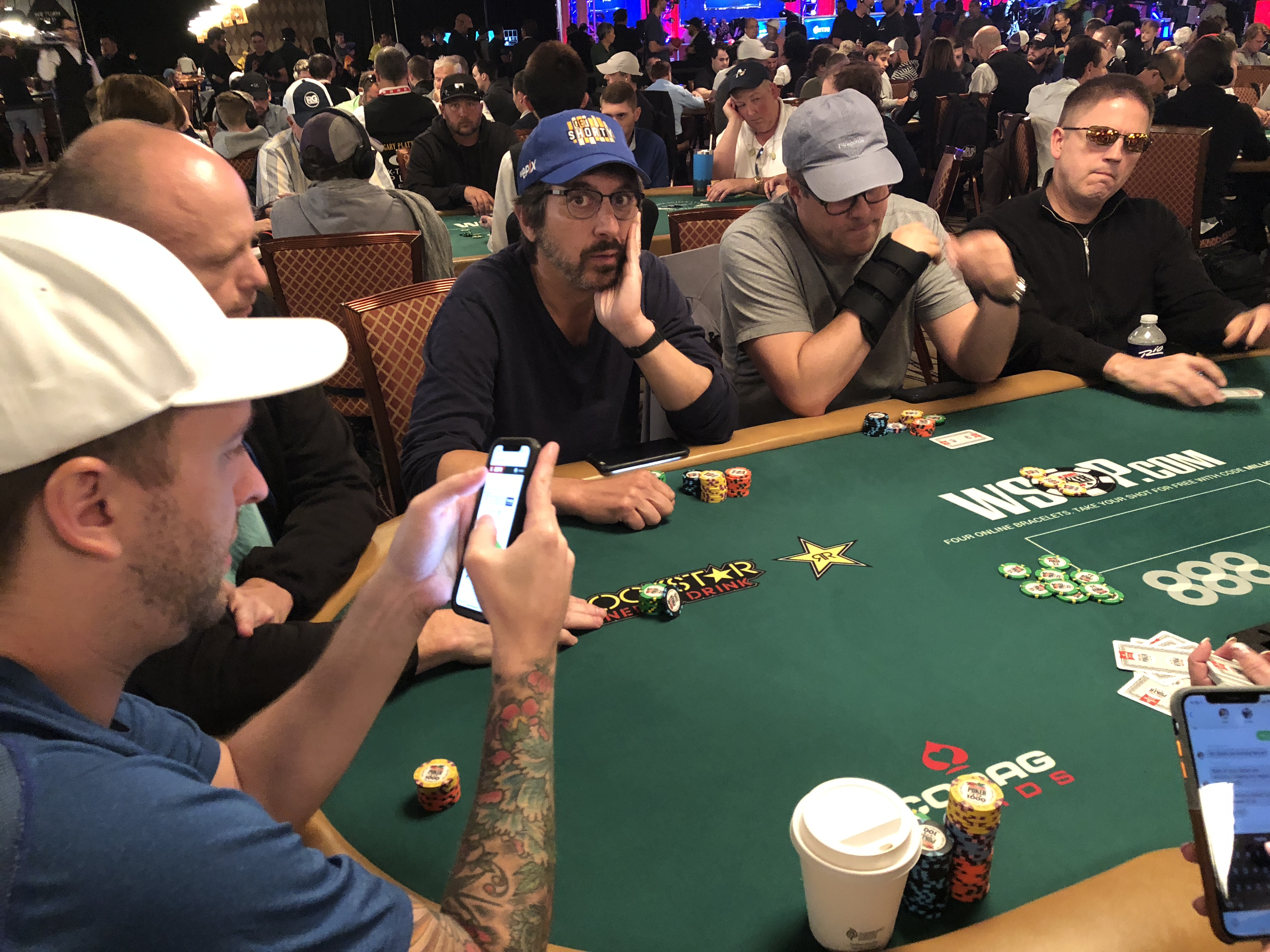 Romano, the star of the former hit TV show “Everybody Loves Raymond,” finished with more chips than his starting stack (61,100), which will put him at over 100 big blinds (300-600) when Day Two begins.

Pollak, who co-starred in movie classics such as “A Few Good Men” and “Grumpy Old Men,” also had a nice showing on Monday, finishing with a comfortable 71,300 chips.

Hollywood producer Randall Emmett joined the celebrity actors at the Rio to compete in poker’s world championship event. And what a day he had. Not only did he finish with a big stack (133,400), upon entering the Amazon room, the filmmaker danced alongside exotically dressed women as a live marching band played the theme song to “Rocky.”

Phil Hellmuth, the 1989 Main Event champion, has his own grand entrance planned for Wednesday and will enter the Rio dressed as either Thor or Iron Man before heading to his seat at 6 pm PT — seven hours late (of course). You can watch the Poker Brat’s shenanigans on ESPN2 during that day’s broadcast. Or, if you aren’t amused by sideshows that stopped being entertaining in 2009, that might be a great opportunity to go grab another beer from the fridge.

Monday’s opening session wasn’t all about gimmicky entrances and actors playing the role of a poker player. Many actual poker pros showed up and bagged big stacks, including poker coach Matt Berkey, 2010 WSOP Player of the Year Frank Kassela, 2012 Big One for One Drop champion Antonio Esfandiari, and the legendary Erik Seidel.

Notable Players Who Bagged Chips on Day 1A

Ray Ramano Hope he takes it down, at least there will be something entertaining in his interviews unlike the last couple of years of winners. One day I really got to get out there and play during all this but knowing me, I wont. Travel is a young mans game and watching Jonathan littles vlogs of the lines and all. Thats the reason I quit going to concerts. I dont mind being in the fray but not too long. I just hope we dont have any idiot outburst like Benger did last year but anyways