David Peters entered the $100,000 Main Event on Friday essentially needing the equivalent of a one-outer on the river to win the 2019 US Poker Open Championship. He left the PokerGo Studio on Saturday with both Main Event and series titles due to some fortunate breaks. 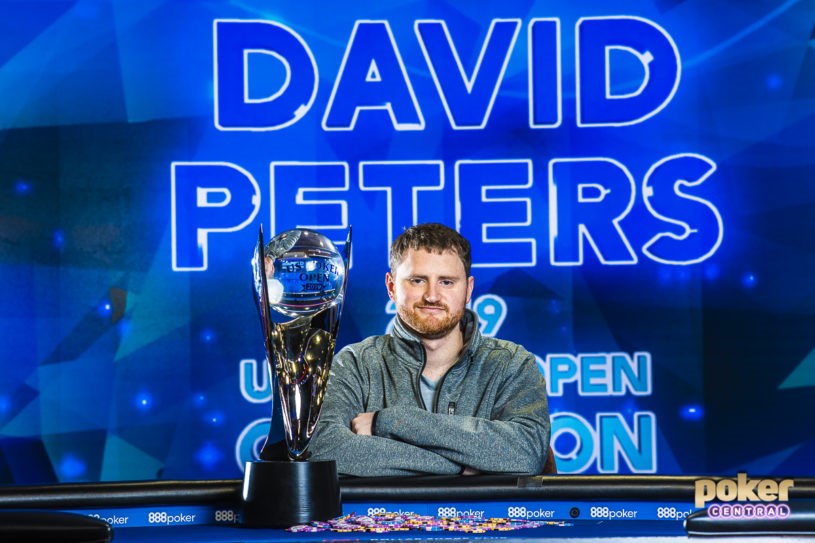 Peters earned that double victory. He out-played a field that included some of the best players in the world. But winning the series title was about as improbable as a #16 seed beating a #1 seed in the NCAA Men’s Basketball Tournament, which has happened exactly once in 136 tries (2018 UMBC over Virginia).

Best of the Best Play for $1.3 Million

The $100,000 buy-in Main Event attracted 33 entries, paying the top five spots. Day One on Friday played down to nine players, none of whom were guaranteed so much as a dollar. Chris Hunichen, a former top-ranked online player, held a sizable chip lead.

Hunichen continued his rise early on Saturday when he busted Nick Schulman in ninth place. Sean Winter, the US Poker Open Championship leader entering the event then was eliminated in eighth place when he lost a race to Keith Tilston.

Jason Koon lost a flip to Peters and busted in seventh place, putting the tournament on the money bubble. And the bubble boy was Justin Bonomo, who was sent home by 2013 world champion Ryan Riess. Everyone left was guaranteed at least $264,000.

Riess, who finally has a cash in a $100k, then ran pocket nines into Tilston’s jacks to bust ($264,000). That put Tilston in the chip lead and he’d hold it for a bit before Martin Zamani, the 23-year-old brother of former WPT Player of the Year Ben Zamani, grabbed the lead.

Before long, Peters took over and once Zamani went out in fourth place ($330,000), he had a 2-1 chip lead over both Hunichen and Tilston.

By fall 2016, Fedor Holz had essentially run away with GPI Player of the Year. He was still holding steady in early December before Peters snatched victory from the jaws of defeat in the year’s final days.

He pulled off yet another miracle on Saturday by shipping the USPO Main Event. David Peters winning a poker tournament is never a surprise. He’s one of the best in history. But he would need to win the Main Event and get every break to go his way to become the USPO Championship.

Since early in the series, everyone anticipated the title would come down to either Sean Winter or Stephen Chidwick. Heading into Friday’s finale, they were deadlocked at 540 points. With higher earnings – $747,900 to $705,950 – Winter held the tiebreaker. So, for Chidwick to win, he needed to cash ahead of Winter.

Chidwick, last year’s USPO champ, busted in 10th place on Friday and was eliminated from contention. But three players – Winter, Schulman, and Peters – entered Saturday’s final table with a shot at the trophy.

With 350 points for first place and Peters sitting at just 200, he needed to win and for Winters to fail to cash, along with Schulman (410 points) to finish outside the top two. If any of those breaks didn’t go his way, he couldn’t win.

Entering the Main Event, Peters wasn’t even on the USPO Championship radar. But, like in 2016, he snuck up and snatched the trophy. Yogi Berra wasn’t kidding when he famously said, “it ain’t over ’till it’s over.”

it’s always nice to read about the successes of others. there is a wish to equal on such people who can fight to the last and won. congratulate.

Excellent victory for David Peter. The victories are like a ladder, because it has steps, when we win small prizes, we usually do not value merit, but that is to be ungrateful, because behind the small prizes there are the big ones.