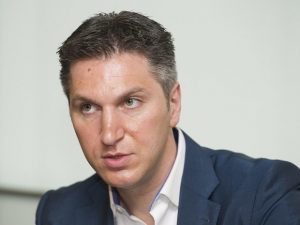 If Amaya’s shareholders are concerned about the direction that the company is headed in, they certainly didn’t show it at the company’s annual meeting.

On Monday, those shareholders overwhelmingly voted to keep David Baazov as the company’s CEO, saying that he had been the architect of a “great year” for the firm.

In total, 96 percent of the shareholder vote was behind keeping Baazov in his position and reelecting the current board of directors.

The year was a memorable one for Baazov, as he orchestrated the $4.9 billion acquisition of PokerStars last summer, a move that transformed the company into one of the world’s largest online gambling brands.

As a result of that purchase, Amaya moved from a relatively minor company on the Venture Exchange to the main Toronto Stock Exchange, and then earlier this month began trading on the NASDAQ Global Select Market as well.

Given that success, there was little question about how the vote would go. ISS Proxy Advisory Services also recommended that shareholders vote in favor of retaining the current board, even if it didn’t give perfect marks to the leadership.

If there was any question about Baazov’s position as CEO, it likely had nothing to do with Amaya’s bottom line.

Instead, it may have been because of an investigation by Quebec financial authorities into suspicious trading in the run-up to Amaya’s purchase of the Rational Group, a period that saw substantial increases in the Amaya stock price.

However, that topic wasn’t event broached during the general meeting, despite the fact that Baazov himself has been said to be a part of that investigation. Baazov said that the investigation is a real matter, but not one that should be overly dramatized.

“It’s not something to be taken lightly, but it’s not Hollywood either,” Baazov said after the meeting. “If people go through the information carefully, look at the timeline, anybody who is sophisticated and rational can come to a pretty good rational conclusion about the events that took place to get us where we are.”

The Autorite des marches financiers (AMF) investigation has not led to any charges against Amaya or anyone who works for the company, though the investigation is ongoing.

The most dramatic moment in the investigation came last December, when police visited Amaya’s Montreal headquarters along with branches of Manulife Securities and Canaccord Genuity Securities.

At the time, those visits were characterized in media reports as raids, though some have suggested that the actions may have been a lot less sensational than that word suggests.

Most of the targets of the investigation appear to be individuals working with Manulife, though a handful of people at Amaya and Canaccord are also being looked into.

US Operations Still a Priority

With Baazov remaining at the helm, it seems likely that Amaya’s focus will remain on breaking into American markets, hoping to gain approval from regulators and encouraging new states to legalize and regulate online poker.

Baazov appeared hopefully about the company’s chances, though he admitted the future of Internet gambling in America was still uncertain.

“We don’t have a crystal ball, and when it comes to politics I definitely don’t like trying to make predictions,” Baazov said. “All we can say is that we’re very comfortable with some of the movement we’ve seen.”

Pokerstars has been milking the poker community for years, usa should never allow pokerstars back in the usa.

We need an alternative to pokerstars which is sucking money out of the game so they can increase profits and appease their investors.

What’s the update on Amaya offices being raided in Canada?