David Baazov Pushes Forward with Amaya Buyout Bid, Despite Being Down Two “Investors”

You have to give David Baazov props for never giving up. Despite having been outed by a Dubai firm he’d included on his original Amaya buyout bid as having incorrectly named them as being on board, and now minus a second “investor,” the guy just won’t back down. 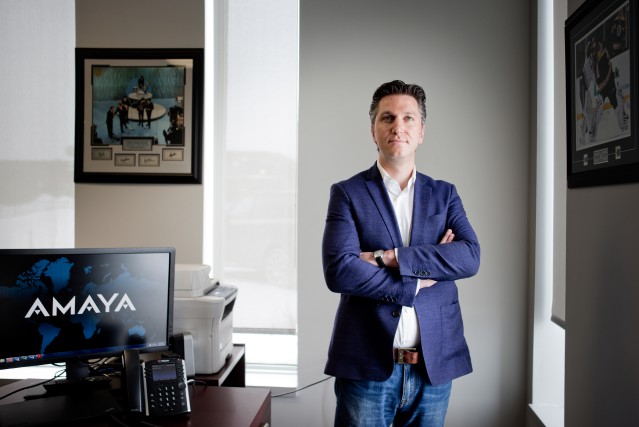 Former Amaya CEO David Baazov has admitted the letter he delivered to the SEC was submitted without Dubai’s KBC Aldini Capital’s knowledge, consent, or involvement. Leaving many to wonder: what on earth was he thinking? (Image: Marco Campanozzi, Archives La Presse)

The Amaya founder and ex-CEO has submitted an amended bid to acquire the PokerStars parent company, with two previously named financial backers dropped from the filing. The move follows a baffling episode in which Dubai-based private equity firm KBC Aldini Capital denied being involved in the bid, despite being named by Baazov in a filing submitted to the US Securities and Exchange Commission (SEC).

KBC Aldini Capital chief executive Kalani Lal told Canada’s Globe and Mail newspaper late last week that he “didn’t know what Amaya was,” and that his firm had “no involvement whatsoever” in the proposal. KBC said it had filed a complaint to the SEC.

The latest Baazov filing drops KBC, as well as another firm previously cited, Ferdyne Advisory Inc., a British Virgin Islands-based company. It’s unknown at this time if Ferdyne was ever on board, or dropped out following the KBC scandal.

Instead, the amended offering provides binding commitment letters promising boosted equity financing from Head and Shoulders Global Investment Fund SPC and Goldenway Capital SPC. Both companies are based in Hong Kong and were mentioned in the original proposal.

“We continue to support David Baazov,” Stanley Choi, chairman of Head and Shoulders Financial Group, told Bloomberg in a phone interview from Hong Kong. When asked if he was concerned about the confusion surrounding KBC’s disavowal of the deal, he replied, “Not at all,” but declined to comment any further on his company’s role in the bid.

The events of last week are mystifying, because it’s highly unlikely that Baazov would cite KBC as a backer without consent, knowing that Amaya would swiftly conduct due diligence on his financial sources. And yet, this is exactly what the new filing appears to suggest, although it gives no reason why the confusion may have occurred.

“The equity commitment letter purported to be delivered to the Acquirer on behalf of KBC was delivered without KBC’s knowledge or consent and that KBC has not committed to provide financing for the proposed acquisition of Amaya,” the revised bid states. “KBC is not one of the Equity Financing Sources of the Proposed Transaction.”

Whatever the truth of the matter, Baazov probably can add a looming SEC investigation to the five insider trader charges he’s currently facing in Canada from regulatory agency AMF. This fact does not bode well for Baazov or for his bid, as he seeks to convince shareholders that the company would be better off under his stewardship.

His offer to take Amaya private is worth about US$6.7 billion, including debt. Despite resigning as the company’s CEO and chairman as a result of insider trading charges, he remains its largest shareholder, with a 17 percent stake.