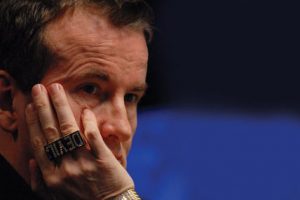 One of the UK’s best loved poker players, Dave Ulliott also known as Devilfish, has recently been diagnosed with colon cancer.

The unexpected news came to light over the weekend after London-based pro, Sin Menis Melin, posted a message of support on Ulliott’s Facebook page.

The revelation on Facebook took many people by surprise and immediately set in motion a cascade of well wishes from the community.

From pros and amateurs to anyone that had seen the charismatic pro on TV, dozens of people have not only written messages of support but taken a moment to relive their favorite Devilfish moments.

Although the exact nature of Ulliott’s condition is unclear, a recent trip to his home in Hull by Dusk Till Dawn owner Rob Yong has shown “the fish” is still in good spirits. According to Simon Trumper (a mutual friend of Ulliott and Yong), the pair enjoyed an evening of laughs last night and Ulliott was even well enough to pose for a picture with his trusty guitar.

That was the last update on his condition, but that hasn’t stopped the outpouring of support from the international community. Despite not having access to a computer from his hospital bed, Chris Ulliot has encouraged people to post as many memories and photos to Facebook as possible.

There’s no doubt that Ulliott has both entertained and inspired dozens of players over the years and everyone at CardsChat wishes him all the luck in the world over the coming days. For those that might not be familiar with Mr. Ulliott’s time in the poker community, here’s a round-up of some of his top moments:

Give Ulliott a few drinks, a microphone and a guitar and you’ve got yourself a night of entertainment. Always ready to sing a song and hold court at a party, Ulliott even went as far as to record his own version of Chocolate Rain.

There have been few rivalries in the poker world that have been more intense than the one between Dave Ulliott and Phil Hellmuth. Constantly trying to outdo each other with their playing skills and table talk, the duo has created a host of memorable moments over the years, including a very memorable showdown in the Premier League years ago.

Almost as fractious as his relationship with Phil Hellmuth, Ulliot has also enjoyed trading shots with Tony G over the years. By far the most amusing showdown was a battle of expletives during a Premier League match.