Is Joe McKeehen the Best Tournament Player Among Recent WSOP Main Event Champions? Our Data Analysis Says He Is

Joe McKeehen finished 3rd in the WSOP Millionaire Maker on Wednesday, adding another $538,276 to his career winnings and another final table feather in his poker cap. With this deep score, a CardsChat data analysis has found the 2015 world champion to be the best tournament player among former World Series of Poker Main Event winners in the post-Moneymaker era. 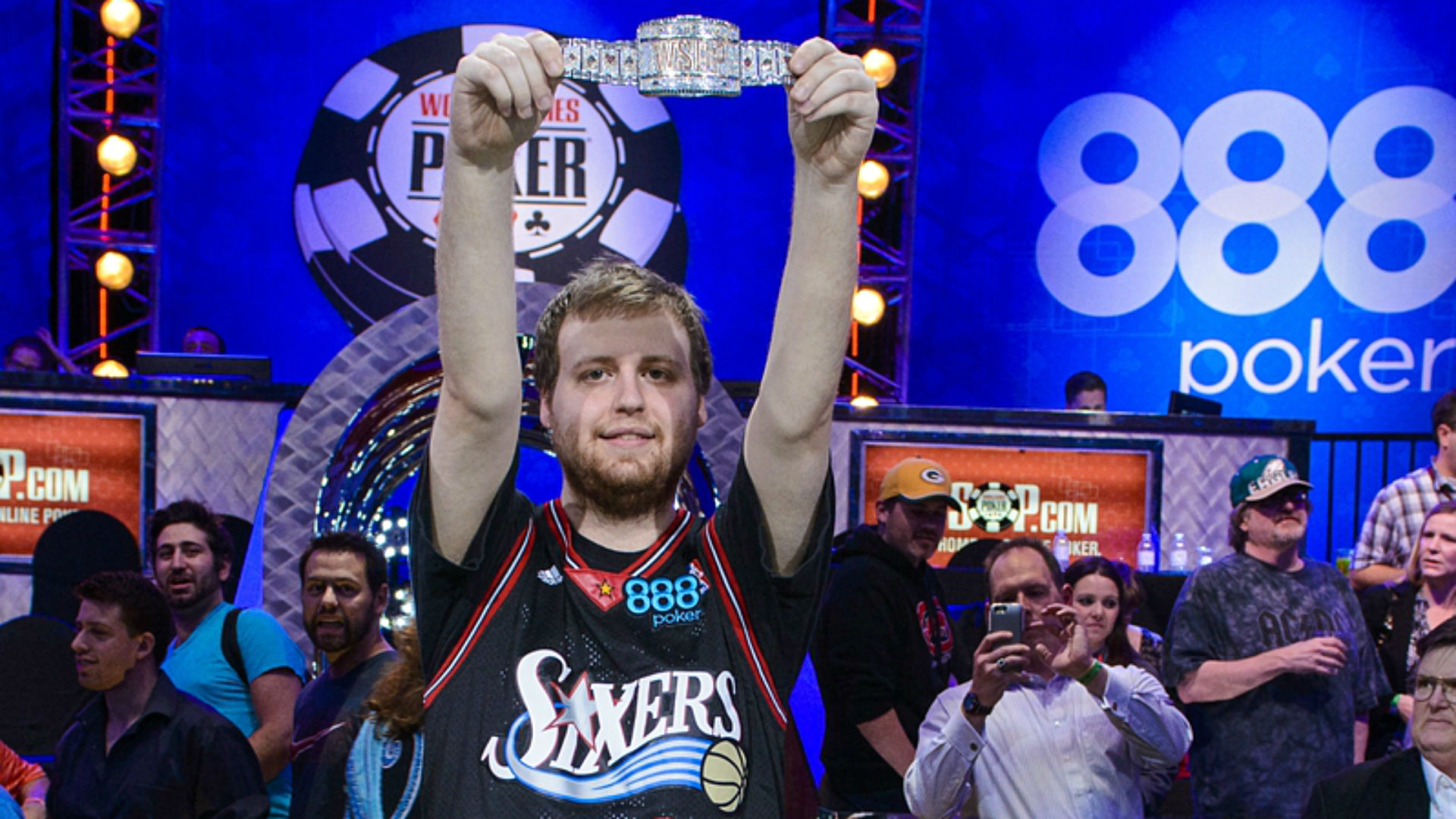 Love him or hate him, Joe McKeehen is one of the best WSOP Main Event champions this century. (Image: sportingnews.com)

The Philadelphia-area native had the chip lead throughout the 2015 Main Event final table but didn’t have the same fortune last night. McKeehen’s stack fluctuated throughout the evening from large to small thanks to a few bad beats. Just ask him.

“Can’t win tourneys you get sucked out 4 times on the final table,” McKeehen grumbled on Twitter after being eliminated. “I have ran so [effing] sour this year on live streams.”

Joe McKeehen has rubbed many in the poker community the wrong way ever since refusing to accept his role as a poker ambassador upon winning the Main Event in 2015. He’s often combative on social media, verbally attacking those who have opposing views, and blocking poker players, media, and fans he doesn’t like or simply has no interest in getting to know.

Whether you love or hate him, you simply cannot deny his ability to stack chips in tournament poker. But is he really the best among former Main Event champions, or at least since Chris Moneymaker won in 2003?

CardsChat looked at data from the past 15 world champions and crunched the numbers to rank them based on lifetime live tournament performances when excluding their WSOP main event scores. Our analysis revealed that McKeehen came out on top. 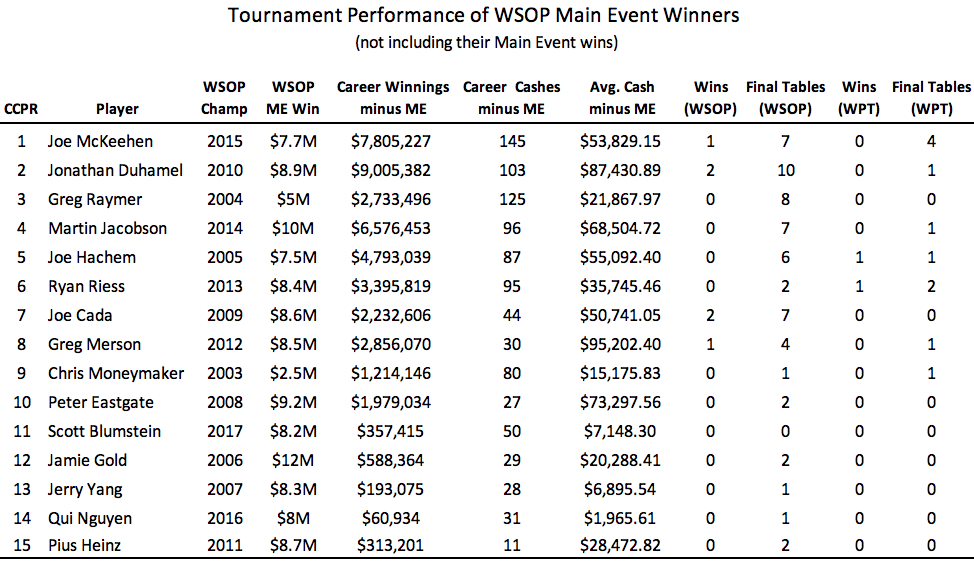 CardsChat Poker Rankings of the past 15 WSOP Main Event winners.

We devised the CardsChat Poker Rankings (CCPR) as a system to rank the performance of past WSOP Main Event champs, based on objective data from Hendon Mob and WSOP.com. Rankings were determined by tournament cashes, WSOP and WPT titles and final tables, and career money earned minus their WSOP main event victory. Cashes, final tables, and titles in WSOP and WPT events were weighted more heavily than other tournament finishes.

Numbers don’t lie, but they can be misleading.

McKeehen’s career tournament resume is unquestionably among the best for Main Event winners from the past 15 years. He has 145 career cashes, including four WPT final table appearances, two WSOP bracelets, and $15.5 million in lifetime earnings.

But some others on the list could be more talented. Or, maybe not.

Take Greg Merson, for example. The 2012 winner’s CCPR ranks only 8th among Main Event champions since 2003. But he spends much of his time at home instead of grinding the tournament circuit, unlike McKeehen who plays in multiple events each month, including a full WSOP schedule.

What would Merson’s resume look like if he competed in as many events as McKeehen? We may never know, but it stands to reason he’d be closer to the top of our list.

And then there’s Pius Heinz, the 2011 champion who mostly disappeared from the game after his $8.7 million score. He finished last in our CCPR rankings. With just 11 career tournament cashes, his resume isn’t impressive, but we haven’t seen enough from him to properly assess his poker abilities.

Ditto for Peter Eastgate, the 2008 champ who quit playing poker full-time within two years after winning his only WSOP bracelet — and that was long before former main event champions started abandoning PokerStars.

Two players who some might think would challenge McKeehen on his CCPR are 2010 champ Jonathan Duhamel, and 2009’s Joe Cada. Both have won multiple bracelets since their main event wins.

Cada just won his third this year, in a $3,000 NLH Shootout. But with just 12 tournament cashes other than his main event victory (four of which have come at this summer’s WSOP), he simply lacks the volume of McKeehen’s 122 cashes, even though their average scores are within a few thousand dollars of each other.

If anyone comes close to challenging McKeehen’s top ranking, it’s Duhamel, whose CCPR puts him at No. 2. He’s the winningest tournament player among recent Main Event champs — with $9 million in winnings, 2 bracelets, and 11 WSOP or WPT final tables. But nearly $4 million of his winnings come from a single bracelet, when he won the $111,111 Big One for One Drop event in 2015.

Greg Raymer may not get the attention from the poker community as more recent winners, but he’s put together an impressive poker career beyond his 2004 Main Event title.

Perhaps credit game selection. Instead of grinding high rollers and internationally televised events, he chooses his spots wisely, mostly competing in tournaments such as the Heartland Poker Tour and Venetian Deepstacks.

And it’s not like he’s skipping the WSOP. He’s made it to eight additional WSOP final tables — ahead of McKeehen, Jacobson, and Cada, and behind only 2010 winner Jonathan Duhamel (who has 10 final tables).

That smart game selection has helped Raymer rack up cashes consistently – 125 in his career. Many players go for glory and lose it all in the process, whereas Fossilman clearly has a better financial plan.

History in the Making

It might be hard to believe players such as Jerry Yang, Jamie Gold, and Qui Nguyen have won the world’s most prestigious poker tournament, an event also won by poker legends such as Doyle Brunson, Phil Hellmuth, and Stu Ungar. But in the modern era where the Main Event fields exceed 6,000 players, luck is a main factor in winning a tournament some consider a “lottery.”

Only four of the past 15 world champions — McKeehen, Cada, Duhamel, and Merson — have won a bracelet outside the Main Event. Joe Hachem and Ryan Riess are the only WPT winners. By comparison, Daniel Negreanu has won as many non-Main Event bracelets (six) and WPT titles (two) as the past 15 Main Event winners combined.

But although the group as a whole hasn’t been stellar outside their Main Event titles, McKeehen, who nearly won his third WSOP bracelet on Monday, has put together an impressive resume that few can top.

Being Canadian I’d argue that Duhamel is the top player of the recent champs. His career earnings minus the ME is more than Joe, he has more bracelets and final tables at the WSOP than Joe does, and tends to win more than Joe when he cashes. Yes – the One Drop from 2015 helps his numbers greatly, but you can’t rule out one tournament won because of what it is, so in my eyes it’s very close between Joe and Jonathan as to who is the current top player out of the recent WSOP ME winners.

The number of cashes and WPT Final tables that Joe has certainly does bode well for his resume, but one piece of information missing that may help understand the numbers is to calculate a tournament cash over the buy-in. In other words, if a tournament is a $10k buy in and you cash for $20k, that tournament multiplier is a 2. Calculating that multiplier and averaging it over tournaments entered may give a better idea as to who the better player in this group actually is.

Or just their ROI

This is a incredible achievement and cements Joe as not only as an amazing MTT player but also one of the very best in the world in this format at present.
His stats are well documented via this link – https://en.wikipedia.org/wiki/Joe_McKeehen

My advice to all interested players is to check out his run in the 2015 WSOP where he made the November 9 playing some varied and brilliant poker.