The poker pro became the fifth player in WPT history to claim three main events in the organization’s 15-year history. Anthony Zinno, Chino Rheem, Gus Hansen and Carlos Mortensen are the others to accomplish the feat. 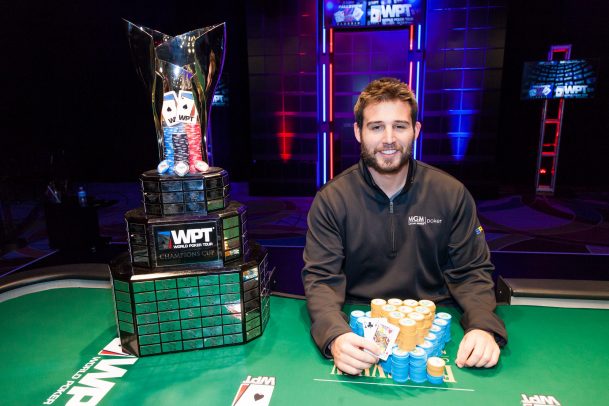 The New Jersey native got his first two in back-to-back fashion in 2014. He seized the WPT Borgata Open in September, then less than a month later, captured the No Limit Main Event in St. Maarten.

It would be 30 months before his next title, but it may have been his most impressive. Elias outlasted 489 entrants to become victorious. On the third day, he needed to mount a comeback to reach the final table. Sitting in 10th position with 22 players remaining, he was moving the wrong way, giving up chips to two players early on the final day.

But he ultimately rallied, taking $230,000 and almost tripling it with a double up on Mark Zajdner, while sending Danny Noseworthy to the rail. That left 17 players, and by the time the nine remaining players reached the final table, he was over the million-dollar chip mark.

Getting dealt pocket aces twice in three hands improved his chip stack even further and he began his climb up the leaderboard. By the time he was heads-up against David Eldridge, he had a $1.1 million chip lead.

The two wasted no time deciding the outcome, as only three hands were played before Elias claimed the top spot.

The victory earned him$335,436 and notched his career winnings at more than $4.4 million in live contests. He’s won $3.8 million online as well.

The WPT Main Events are not the only tournaments at which Elias has succeeded. He took top honors at the 2011 Southern Poker Championship, as well as the 2011 Seminole Hard Rock Showdown, the 2012 WPT World Championship in Las Vegas, and the 2014 WPT Best bet Bounty Scramble.

His fortunes at the WSOP have not been quite as impressive, though. He has cracked the top 10 three times since 2009 with his highest finish at eighth in the 2010 $5,000 No Limit Hold’em Six Handed.