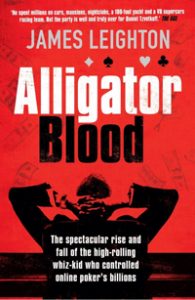 Daniel Tzvetkoff’s dramatic rise and fall in online poker’s pre- and post-Black Friday world is outlined in a new book about his life. (Image: Simon and Schuster)

He was the extravagant young multi-millionaire who brought online poker to its knees, a hubristic risk-taker who betrayed the industry that made him rich, an FBI informant whose testimony facilitated the Black Friday indictments. A book that details it all, Alligator Blood, charts the rise and fall of Daniel Tzvetkoff, the Australian Internet tycoon who, as head of payment processing company Instabill, facilitated illegal payments for the online poker industry in the US, before bringing it all crashing down around him.

From Rags to Riches to FBI Informant

Daniel Kim Tzvetkoff was born in Queensland, Australia, the son of Bulgarian immigrants. The young Tzetkoff was a computer geek and precocious entrepreneur, who, at 13, launched his own web design business, and at 16 was creating animated cartoons for The New York Times website. Then he wrote the coding for a payment processing system in his bedroom at his parents’ house – this was in 2000, when e-commerce was just taking off.

In 2004, Tzvetkoff met attorney Sam Sciacca and together they formed Intabill, which became a successful online payment processing company. However, it wasn’t until 2006 and the passing of the Unlawful Internet Gambling Enforcement Act (UIGEA) that things really started to take off for Intabill. UIGEA made it a criminal offense for a financial institution to process any transaction that related to online gambling, and while the banks and other online payment processing companies backed off, Intabill took a gamble with the US government.

Tzvetkoff signed a deal with three of the biggest poker sites on the Internet, FullTilt, PokerStars and Absolute Poker, and the billions of dollars worth of transactions that constituted the global poker economy began to pass through his hands.

Tzvetkoff was now a 25-year-old multi-millionaire, with a fortune of some $80 million, and he embraced the lifestyle with gusto; the book details a life of pure excess and hedonism – a private jet, a $7.8million yacht, a $70,000 Lamborghini, a home worth $28 million, and non-stop partying across the world. Soon, though, Tzvetkoff’s life would begin to unravel.

His flamboyant behavior attracted the attention of the authorities, forcing him to launder money through other businesses. Investment in a payday loans company turned sour, and meanwhile his spending habits had gotten completely out of control. When the poker sites came knocking for their money, they found Tzvetkoff couldn’t pay. Siacca, meanwhile, found that Tzvetkoff had been siphoning off money from Intabill, and in July 2009, the company collapsed. Intabill was broke.

Tzvetkoff showed up in Vegas in April of 2010, where he was immediately arrested and charged with money laundering, bank fraud, conspiracy charges and being the brains behind a $540 million racket. He faced up to 76 years in jail and personally owed $143 million to creditors around the world. In was then that he turned informant, providing the FBI with information that lead directly to the Black Friday indictments.

While online poker was effectively shut down in the United States, with many involved in processing illegal payments arrested and incarcerated, Tzvetkoff avoided prison; having made some powerful enemies, he and his family were spirited away in a Witness Protection program, where they remain to this day.

While Daniel Tzvetkoff will always be a figure despised by America’s online poker players, James Leighton’s book is a fantastic tale of hubris and nemesis, of excess, deception and betrayal, and a must-read for anyone interested in the events surrounding Black Friday. Soon to be parlayed into a movie, it’s out now, published by Simon & Schuster.

This is gonna be exciting!