Daniel Strelitz Out Front at Final Table of 2017 WPT LA Poker Classic, Mike Sexton Still In It to Win It

Day Five at the 2017 WPT L.A. Poker Classic began with fireworks and ended with the television final table of six decided. 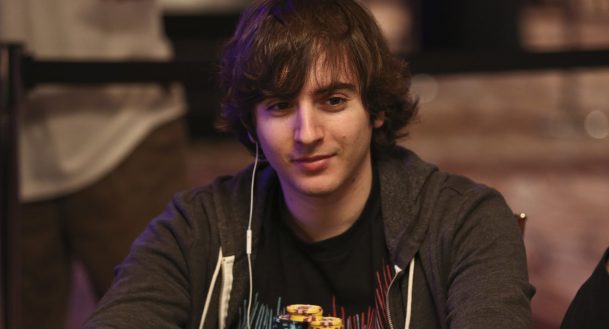 Daniel Strelitz’ chipstacks will dominate when the final table of six sits down to play on Thursday. (Image: cardplayer.com)

For the third straight day, Daniel Strelitz left the Commerce with a chip lead. But now he has a commanding advantage over everyone else at the table. The California resident’s stack size is 6,485,000. That’s more than 40 percent of the total number of chips in play. His closest competitor, Simeon Naydenov, has 2,860,000.

Strelitz eliminated the bubble boy, Matt Berkey, in 7th place, and on a sick hand. After flopping the nut straight, Berkey got his money in against the nut flush draw. The river has a tendency to be cruel, and it was on this hand.

But there was no Phil Hellmuth-like blowup from Berkey. He didn’t accuse Strelitz of being unable to spell “poker.” Instead, he exited with grace and class.

“Thanks to everyone sweating from afar. It doesn’t go unnoticed. Happy the hard work is paying off. Best of luck to @MikeSexton_WPT & co.,” he posted on Twitter.

That wasn’t the only sick hand of the day. Shortly after “shuffle up and deal” was announced, Rainer Kempe was eliminated in 18th place with A-K pre-flop in a three-way pot. WPT commentator Mike Sexton had the best hand with pocket kings. But it was Visna Leutic whose Q-J ended up scooping the main pot, after hitting two pair on the turn.

Sexton will be back today, much to the delight of fans. The 69-year-old Poker Hall of Famer will kick off Day Six with 1,165,000 chips. That’s the second-shortest stack at the table, but he has 38 big blinds, more than enough chips to make a run.

Sexton has one of the most recognizable faces and voices in poker. He’s enjoying the run, just four months after winning his first WPT event. Among his supporters is UFC ring announcer Bruce Buffer, who believes Sexton can do it again.

“Proud of your performance on the green felt…Let’s take down the Bay 101 together…See you at the final table Champ,” Buffer posted on Twitter.

The tournament began on Saturday with 521 players ponying up $10,000 to take a shot at winning one of the last events on the 2016-2017 World Poker Tour schedule.

The remaining players will return to the Commerce Casino in Los Angeles on Thursday, to resume play at 4 pm PST. The winner will receive entry into the $15,000 buy-in Tournament of Champions on April 7 in Hollywood, Florida. Oh, and $1 million, which will pay for a few more tournament buy-ins.

Meet the final table, which will air on Fox Sports at a future date: