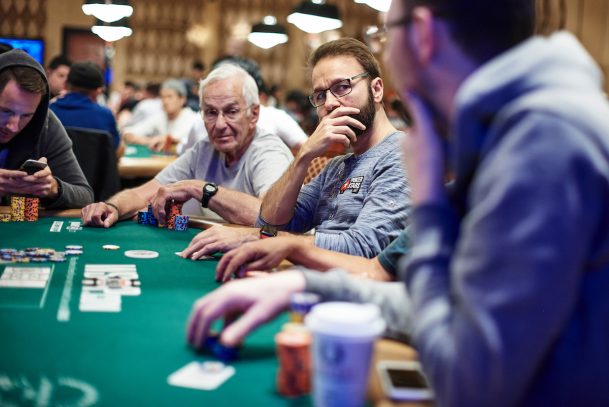 Daniel Negreanu went to the rails in the 2017 WSOP Main Event when his pocket sevens lost to a runner-runner four-card flush for opponent John Allan Hinds. (Image: Antonio Abrego/pokerphotoarchive.com)

Meanwhile, Day 1B of the $1,111 Little One for One Drop, the final tournament of the summer, also took place inside the Rio in Las Vegas.

Dedusha on Top Heading Into Day 3

Dedusha, who was playing in his first WSOP Main Event, began the day with around 100,000, and now he will take the overall chip lead into Thursday’s Day 3, which will mark the first time the entire field will play together under one roof.

“I guess I ran good,” Dedusha told WSOP officials at the end of the night. “I lost a few pots as well, but mainly I ran good. I held up, I won the races, I was on the better end of a cooler. But also I played good. I picked up many small pots here and there.”

Another player to fall was Daniel Negreanu. He got his short stack all in from early position holding the 7♣7♦ and was primed to double through John Allan Hinds, who called from the big blind with the 6♥6♠. Negreanu was looking good on the 4♠2♠10♦ flop, but the running 3♠ turn and 9♠ river gave Hinds the runner-runner spade flush to eliminate poker’s all-time money leader.

It happened when he raised to 1,400 from early position and the player on the button called. Jesse Yaginuma then moved all in from the small blind holding the A♥A♦ and Yuan called with the A♠J♠. The other player folded and Yuan got extremely lucky after the board ran out Q♥10♠4♠K♦4♦ to give him a Broadway straight.

At 3 pm PT, the third and final starting flight in the Little One for One Drop will get underway. The tournament, which features unlimited re-entries, offers the last chance of the summer for players to chase a gold bracelet.